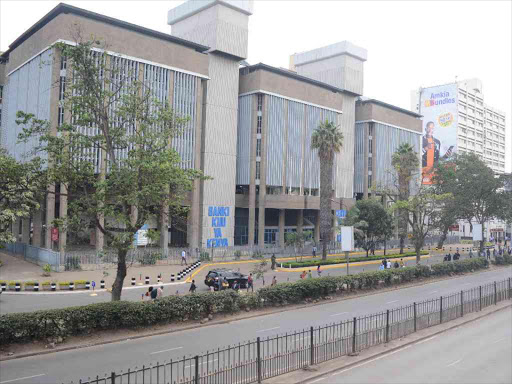 The Central Bank of Kenya along Haile Selassie Avenue./FAITH MUTEGI

The Bank Supervision Annual Report 2021 released by the Central Bank of Kenya (CBK)on Friday attributes this to the growth in investments in government securities and loans and advances.

''The sector’s asset base grew by 11 per cent to approximately Sh6 trillion in 2021 from Sh5.4 trillion in 2020. The sector recorded strong capitalization levels as a result of retention of profits and additional capital injections,'' CBK said.

The increase in profitability was attributed to a higher increase in income of 9.3 per cent as compared to a decrease in expenses by 6.7 per cent.

The regulator projects the sector to remain resilient in 2022, as banks continue supporting the post-covid economic recovery.

Equity Bank Group was the first to cross the Sh1 trillion rubicon, after the acquisition and integration of its business with Banque Commerciale Du Congo (BCDC) in December 2020, eclipsing KCB Group as the largest bank in Kenya in terms of asset value.

It is followed closely by KCB Group whose balance sheet expanded by 19.3 per cent to Sh1.2 trillion, driven by organic growth across the business and the consolidation of BPR.

Co-op Bank which acquired Jamii Bora two years ago and renamed it Kingdom Bank saw its total assets grow to Sh597.0 billion in the first three months of this year, an eight per cent growth from Sh552.9 billion in the same period last year.

According to the report, the country has 20 operating local private commercial banks and two local public commercial banks, which accounted for 68.3 per cent and 0.5 per cent of total net assets respectively.

A total of 17 operating commercial banks were foreign-owned and accounted for 31.2 per cent of the sector’s assets.

Nairobi County registered the highest decrease in the number of branches by 33 branches.

The decrease in bank branches is mainly attributed to the closure of branches by some commercial banks due to the adoption of alternative delivery channels including agency banking, mobile phone banking, and internet banking.

According to the report, there are nine large banks in the country with a combined market share of 74.76 per cent , eight medium banks with a market share of 16.41 per cent and 22 small banks accounting for 8.82  per cent of the market share.

Most lenders attributes this to business recovery
Business
8 months ago

This is after migrating Banque Commercial Du Congo (BCDC) to its core banking platform.
Business
2 years ago

The Group’s balance sheet expanded by 19.3 per cent to Sh1.2 trillion
Business
8 months ago

The total value of assets grew to Sh597 billion, from Sh552.9 billion in the same period last year.
Business
8 months ago
Post a comment
WATCH: The latest videos from the Star
by VICTOR AMADALA Business Writer
Kenya
30 May 2022 - 04:00
Read The E-Paper