The Group’s balance sheet expanded by 19.3 per cent to Sh1.2 trillion 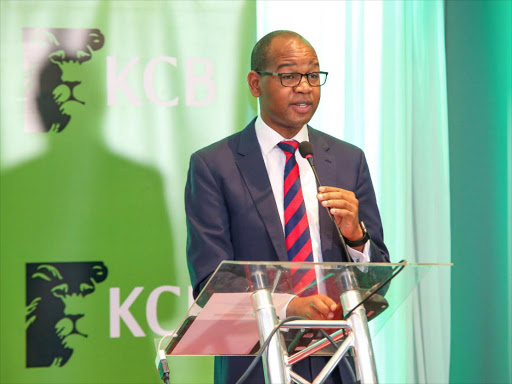 KCB Group's profit after tax surged 54.6 per cent to Sh9.9 billion in the first three months of the year boosted by growth in total income and reduction in loan loss provision.

This was an increase from the Sh6.4 billion reported similar period last year.

Revenues increased by 26 per cent to Sh29 billion on account of an increase in interest income, non-funded income from lending activities and service fees and a 21.1 per cent rise in earning assets.

Net interest income grew by 18 per cent to Sh19.7 billion driven by an increase in net loans and advances coupled with growth in investments in Government securities.

This was partially offset by an increase in interest expenses occasioned by tight market liquidity.

Non-funded income (NFI) grew by 47.2 per cent to Sh9.3 billion driven by additional disbursements during the period which increased lending fees by 73 per cent.

The resumption of economic activities across most sectors led to the growth of non-branch transaction numbers which surged by 70 per cent while branch transactions grew 16 per cent to drive overall service income up 35 per cent.

The other non-funded income streams were equally strong with FX income growing 46 per cent, trading income up 82 per cent and other income up 16 per cent.

From this performance, the Group was able to register a 32 per cent NFI to total income ratio.

Provisions decreased by 27.5 per cent from a similar period last year largely due to a drop in corporate and digital lending impairment charges after Covid-19 related provisions recognized in the full year 2021.

The non-performing book continued to come under pressure due to slow recovery in the construction, hospitality and part of the manufacturing sectors causing a deterioration from 14.8 per cent to 17 per cent.

The Group’s balance sheet expanded by 19.3 per cent to Sh1.2 trillion, driven by organic growth across the business and the consolidation of BPR.

Customer deposits increased to Sh845.8 billion, registering a 12.9 per cent growth driven by a proactive deposit mobilization strategy across our markets.

These deposits were utilized to fund net loans and advances which went up 18 per cent largely on account of improved corporate and retail lending to close the period at Sh704.4 billion.

The Group’s participation in Government securities recorded an increase of 32.6 per cent from Sh212.5 billion to Sh281.8 billion during the same period.

Shareholders’ funds grew 23.3 per cent to Sh181.8 billion on improved profitability for the period.

The Group was compliant with all capital requirements. Core capital as a proportion of total risk-weighted assets closed the period at 19.2 per cent against the Central Bank of Kenya's statutory minimum of 10.5 per cent.

The total capital to risk-weighted assets ratio was at 22.8 per cent against a regulatory minimum of 14.5 per cent.

Russo will be taking over from Joshua Oigara whose contract has ended.
News
8 months ago

KCB says this new subsidiary gives the Group the edge to deepen its strategy to scale regional presence.
Business
9 months ago

The merger kicks off April 1
Business
10 months ago

The lender's net earnings for the year under review grew to Sh34.2 billion.
Business
10 months ago
Post a comment
WATCH: The latest videos from the Star
by VICTOR AMADALA Business Writer
Kenya
25 May 2022 - 16:53
Read The E-Paper