Most hit towns are Nairobi, Mombasa and Nakuru.

•KRA has rolled out a fourth version of the Excisable Goods Management Son march 13,2014.ystem (EGMS) with improves security features.

•Manufacturers however say they are not getting the new stamps. 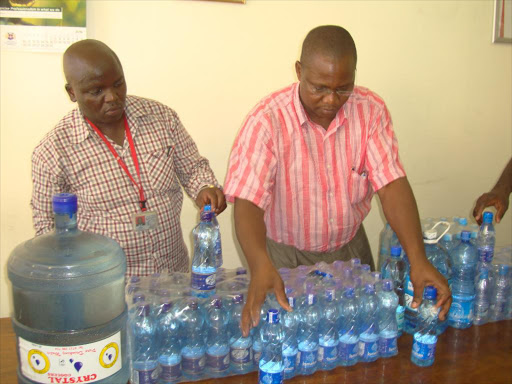 Water bottlers in Kenya are concerned over the rise in fake excise stamps in the market, amid a shortage of legit labels from KRA.

This compounds the situation as already unscrupulous dealers are minting billions through tax evasion on alcoholic, non-alcoholic drinks and cigarettes.

The most hit towns are Nairobi, Mombasa and Nakuru, bottlers through the Water Bottlers Association of Kenya (WBAK) yesterday said, saying this had led to massive businesses loss for genuine traders.

“There is a lot of fake stamps and we are loosing to rogue dealers, who are also undercutting market prices since they don't pay taxes,” WBAK chairperson Henry Kabogo said in a statement yesterday.

Concerns around the rise in fake stamps started last year when the Kenya Association of Manufacturers (KAM) raised alarm , noting it was fuelling growth of illicit trade mainly on excisable goods.

It is estimated that illicit trade denies Kenya up to Sh100 billion in revenue annually- Anti-Counterfeit Authority.

The authority has been forced to review the security features on the Excisable Goods Management System (EGMS), with the current being a fourth version since the first introduction on alcoholic drinks and cigarettes in 2013.

“Currently we are at version four which we have completed the full roll-out,” Kinoti, said.

The taxman is banking on the new generation of excise stamps to curb counterfeiting and seal revenue leaks.

However, WBAK which represents more than 1,300 bottlers has raised concern over the timelines in place for the roll-out and lack of enough stamps.

It said bottlers only came to learn of the new stamps on December 2, 2021 when they were invited for sensitisation on the new stamp rollout which had a one month timeline.

“One month notice was insufficient to completely adjust to the new version of stamps. Three months would have been realistic and reasonable,”said  WBAK

It further wants the government to reduce bureaucracy in stamp approval  especially from the tax stations.

They also want fairness between fully automated plants and those using manual stamps.

“EGMS was meant to foster trade and not bring unnecessary barriers to trade and which in turn bars access to clean and safe bottled drinking water,” Kabogo said.

Separately, KAM has called on MPs not to approve the proposed increase in excise tax for bottled water and other excisable goods.

It said this will promote illicit trade as consumers will resort to cheap imports smuggled into the country.

The government is targeting  bottled water, cosmetics, beer, wines and spirits, cigarettes, non-alcoholic drinks, chocolate and motorcycles, whose prices will also be affected by the annual adjustment for inflation.

KAM wants the adjustment done every two years as opposed to annually.

Treasury Cabinet Secretary Ukur Yatani in his budget however said that the adjustments on taxes is among measures that will help the government generate an additional Sh50.4 billion in the 2022/2023 fiscal year.

The new excise taxes, if the Finance Bill is passed as it is, will increase the price of a litre of bottled water by up to Sh15 if packaging and other production costs are factored in, bottlers say.

EGMS was first introduced on alcoholic drinks and cigarettes in 2013.
Business
3 months ago

KRA did not indicate the exact date the new tax measure will take place
Business
7 months ago
WATCH: The biggest news in African Business
by MARTIN MWITA Business Writer
Kenya
18 May 2022 - 04:00