•Earnings from the Madaraka Express more than doubled to Sh2.2 billion from Sh896 million in 2020.

•The increase in passenger traffic and revenue was buoyed by the easing of Covid-19 measures. 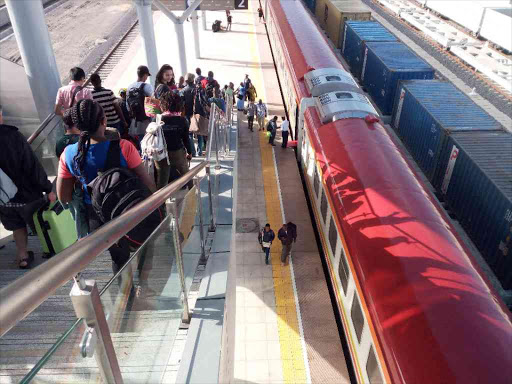 Passengers at the Nairobi terminus heading to board the SGR train to Mombasa.
Image: FILE

KenyaRailways is optimistic of a stronger performance this year as investment in the sector starts to pay off.

This is after both the Standard Gauge Railway (SGR) and Metre Gauge Railway(MGR) posted a strong performance in 2021 , with increases in revenues from both passenger and cargo services.

Earnings from the Madaraka Express more than doubled to Sh2.2 billion from Sh896 million in 2020, the Economic Survey 2022 shows.

Similarly, revenue earned from passenger services on the Metre Gauge Railway (MGR) rose significantly from Sh83 million in 2020 to Sh234 million in 2021.

The increase in passenger traffic and revenue was buoyed by the easing of Covid-19 measures relating to mobility coupled with the introduction of additional passenger trains for night travel.

Revenue from cargo transported on the MGR also rose, albeit marginally, from Sh1.114 billion in 2020 to Sh1.118 billion.

This, even as the volume of cargo transported via MGR declined marginally from 652,000 tonnes in 2020 to 644,000 tonnes during the period under review.

“This was mainly due to a decline in import volumes of steel, one of the main commodities transported using the MGR. Despite the drop in cargo haulage, there was a slight increase in revenue from MGR cargo stream from partly due to ferrying of high value cargo,” the survey by the Kenya National Bureau of Statistics (KNBS) states.

Export volumes on the other hand increased by 9.7 per cent to 4.6 million metric tonnes.

“The increase in exports is partly attributed to increased exportation of iron ores and titanium,” the survey states.

This is mainly attributed to easing of Covid-19 containment measures in the country, continued revamping of Nairobi Commuter Rail (NCR) services through the full operationalization of 11 Diesel Multiple Units (DMU), and the introduction of new routes to Limuru and Lukenya.

“The re-introduction of the Nairobi - Kisumu Safari Train in December 2021 partly contributed to improved revenue in the MGR passenger service,” Kenya Railways led by managing director Phillip Mainga, has noted.

During the year, Kenya Railways undertook various construction and rehabilitation on the MGR network.

Up to 23.35 kilometres of MGR railway line link between the Inland Container Depot (ICD) Naivasha and Longonot were constructed.

The revival of the old Metre Gauge Rail to Kisumu and the link to Mombasa through the SGR is expected to boost trade in the country and with neighbouring countries.

Local traders and industries are hoping to continue benefiting from the projects with the Kenya Association of Manufacturers (KAM), Kenya National Chamber of Commerce and TradeMark East Africa terming the infrastructure as a "game-changer".

The rail and the upgraded Kisumu Port are expected to boost exports and imports through the Lake Victoria transport network mainly between Kenya, Uganda and Tanzania.

According to KAM, the revival of the old rail is significant for the local manufacturing sector as it opens up Rift Valley, Western and Nyanza regions, and increases connectivity with other parts of the country, particularly Nairobi and Mombasa.

More than 1,000 local firms are facing closure.
Business
6 months ago

Kenya has been keen to have her neighbour use its new infrastructure.
Business
8 months ago
WATCH: The biggest news in African Business
Post a comment
WATCH: The latest videos from the Star
by MARTIN MWITA Business Writer
Kenya
09 May 2022 - 04:00
Read The E-Paper