•Companies are accused of exporting more than the set quotas at the expense of the local market.

•Some towns in rural parts of the country are yet to get stable supply with parts of Nairobi yesterday reporting a return on the shortage witnessed early this month. 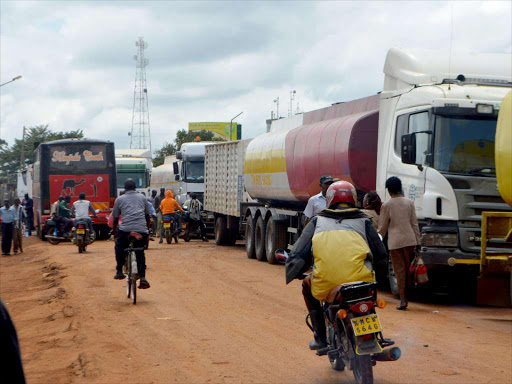 The fuel shortage which had slightly eased in various parts of the country could hit previous levels due to insufficient local stocks in the market.

Major oil companies and independent dealers are being accused of exporting more than their set quotas to neighbouring countries at the expense of the domestic market.

The government has now put on notice 100 companies, even as the country stares at yet another fuel crisis.

It says there exists cartel-like dealing among Oil Marketing Companies and sellers leading to an artificial shortage.

Nairobi, Mombasa and other major towns had recorded a near back to normal supply in the last two weeks after a week-long country-wide crisis in the first week of April.

However yesterday, a number of petrol stations in Nairobi reported shortages.

Far-flung areas such as Siaya, Migori, Vihiga, Marsabit, Isiolo, Samburu and Laikipia are yet to get stable supplies since the crisis, with independent dealers blaming lack of volumes which they source from major marketers.

“We were meant to believe that fuel would be released after the price change but nothing has happened. We still don't have access to wholesale sales by the major players,” the Kenya Independent Petroleum Distributors Association (KIPEDA) KIPEDA chairman, Joseph Karanja, told the Star on telephone.

There are about 1,200 licensed independent dealers country-wide, accounting for 45 per cent of products sold in the market, mainly in remote parts of the country and small towns where big OMCs have lesser footing.

It has emerged that Oil Marketing Companies (OMC) have increased their exports at the expense of the local market with the Ministry of Petroleum and Mining warning of "dire consequences".

In a letter to chief executives of the 100 companies, seen by the Star, Petroleum PS Andrew Kamau asked the firms to focus  and increase volumes to the local market by close of business on Tuesday, failure to which the ministry will take action.

The importers are expected to adhere to the ratio of 60:40 for local: transit but this has not been the case, according to authorities.

Kenya Revenue Authority(KRA) last week noted there were changes in local/transit rations that had dropped to 44:56 observed from three vessels: Tavistock Square, Solidarity and MT Front Vega, where transit petroleum product is more than the local allocations imported through Kenya.

Some companies among those put on notice by the ministry have huge volumes at the Kenya Pipeline Company’s storage facilities yet they do not own petrol stations locally.

The slow uptake of their fuel has been blamed for clogging the pipeline. KRA has threatened to auction such fuel.

Last week, Customs and border control commissioner, Lilian Nyawanda said the taxman will not grant any transit period extension for any product that will not have been exited within 30 days, with such product being auctioned.

PS Njoroge in his letter dated February 26 says For sellers, any product declared as local in excess of the transit volumes of 40 per cent shall not be allowed to participate as a seller in the upcoming tenders.

“Furthermore, the equivalent of their respective ullage shall be relocated to those selling to the local market,” said Njoroge.

For buyers, all their excess volume declared as transit will be reallocated in the next ullage allocation.

As of Tuesday, there was a total of 34,000 cubic metres (34 million litres) that was being held in excess of the transit volumes in KPC systems.

“This is completely unacceptable,” Njoroge said.

The Energy and Regulatory Authority (EPRA) is keen to reduce the capacity share of OMCs who recently increased their transit volumes, and increase that of those whose local sales increased above their normal quota during the crisis.

Meanwhile, the National Oil Corporation of Kenya ( Nock) has started the process of importing 30 per cent of Kenya's super, diesel and kerosene product which will be shared mostly with independent dealers.

The imports will also be used to provide strategic stocks for the country and alleviate the shortage of the commodities due to global disruptions.

Yesterday, the government held talks with dealers to avert a possible crisis.

This was expected to last eight days for petrol and 10 days for diesel.

On the other hand, petrol stocks for transit stood at 70.3 million for petrol and 61.77 million for diesel, which would last 19 days and 15 days, respectively.

Independent dealers who account for 45% of sales say they are yet to access wholesale volumes.
Business
1 month ago

The shortage has seen a litre of petrol trade at a high of Sh300
Business
1 month ago
WATCH: The biggest news in African Business
by MARTIN MWITA Business Writer
Kenya
28 April 2022 - 04:00