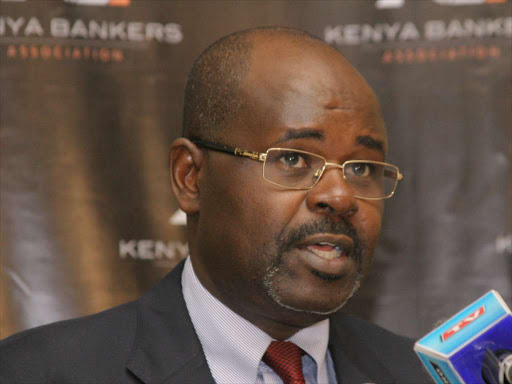 The Credit Reference Bureau (CRB) listing freeze on new loan defaulters of sums below Sh5 million could hinder the implementation of risk-based lending, bankers have said.

The Kenya Bankers Association (KBA) chief executive Habil Olaka said this in a commentary supporting the new credit pricing model favoured by industry players amid opposition from some financial analysts.

"The implementation of the model could be temporarily hit by the stay of a moratorium on CRB listings for borrowers which stays until October this year,'' Olaka said.

The directive by the CBK in November last year followed a presidential order on October 20, 2021, as the government sought to ease availability of credit to the private sector as part of the Covid-19 recovery stimulus package.

''Borrowers with loans below Sh5 million that were performing but fell into default after October 1 this year and those who fall into default between now and September 2022 will not be listed with CRB,'' CBK governor said in a directive dated November 2, 2021.

KBA's concern comes at a time when CBK has so far approved risk-based lending pricing models for six commercial banks among them Equity Bank.

Yesterday, Olaka told the Star that approvals are between individual lenders and the regulator, adding that Bank of Baroda, Bank of Africa, Victoria Bank, Bank of India and Acess Bank had applied for approval.

"The six banks had received their approval by end of March. Since the process is gradual, there is no definite date for CBK to approve proposals from each bank,'' Olaka said.

The six lenders hold 18.4 per cent of the banking industry's gross private-sector loans.

Approvals for some of the biggest banks in terms of asset value including KCB, Coop Bank and NCBA are still unknown despite them hoping to get the regulator's nod before the end of this month.

Last month, KCB Group managing director Joshua Oigara told an investor briefing attending the release of the end of 2021/22 financial results that he hoped CBK to approve the bank's proposal within a week.

''We want to reward our customers based on their borrowing profiles. We anticipate CBK to approve our pricing model in a week's time,'' Oigara said.

Other top-tier banks including Absa, Stanbic and Coop Bank have disclosed being in negotiations with the reserve bank to win their own approvals on loan pricing.

Equity Group was the first to receive the regulator's nod which will see it price loans at between 13 and 18.5 per cent depending on each borrower’s risk profile.

Although some analysts view a risk-based pricing regime as a cure for the interest rate cap regime that was repealed in 2019, others differ strongly.

For instance, Olaka believes that the new regime will unlock credit to the private sector.

His views are supported by James Mbai of Nabo Capital who believes that the model will double credit to the private sector and brew social-economic transformation.

However, experts at Deloitte are worried that Kenya risks choking credit supply to certain segments of borrowers if it adopts risk-based lending.

According to Charles Luo, leader, of the Deloitte Financial Institutions Services Team, the approach will give wealthy customers easy access to low-cost loans while less well-off borrowers may not be able to bear the costs of denying them credit.

In 2018, the International Monetary Fund (IMF) opposed the model as a replacement for rate cap review, saying it will give lenders unnecessary powers to determine who, when and how much to lend at.

Political risk however likely to reduce demand for credit.
Business
1 year ago

Climate failure accounts for 42.1 per cent of long-term global risk
Business
1 year ago

Banks yet to conclude loan repricing after rate cap repeal

Banks still haven't posted their new interest rate offering on the cost of credit website
Business
3 years ago
Post a comment
WATCH: The latest videos from the Star
Kenya
28 April 2022 - 04:00
Read The E-Paper