Independent dealers say they are yet to access wholesale volumes.

•They account for 45% of fuel products consumed in the country.

• Energy CS Monica Juma had on April 14 assured the country of restoration of normalcy within 72 hours (three days), as imports continued to increase. 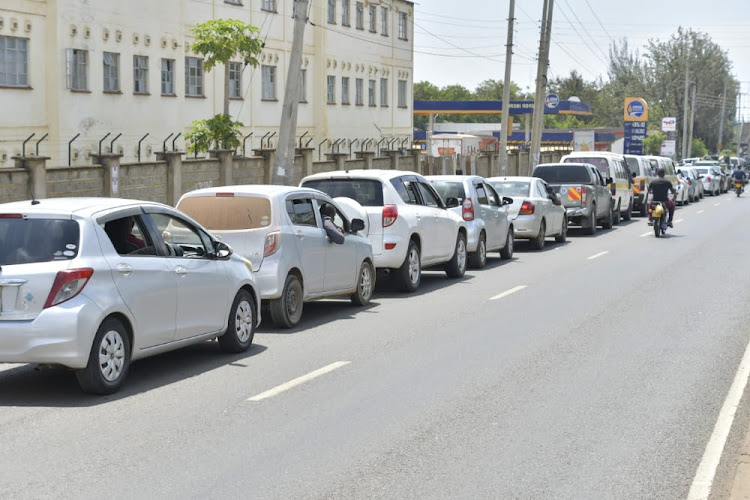 Motorists in some rural parts of the country are still facing a fuel shortage for the fourth straight week even as the government assures of enough stocks.

Independent dealers who account for about 45 per cent of products sold in the market, mainly in remote parts of the country and small towns, yesterday said they are yet to access wholesale volumes.

This has left the more 1,200 licensed independent dealers country-wide without product, with those selling being forced stock their pumps at normal retail prices, which has forced them to increase their selling prices to make a profit.

Some franchisees or dealers trading on major Oil Marketing Company’s brand names yesterday also reported strained supplies, which has seen them access product at near the retail prices.

Total (depot) for instance was yesterday selling a litre of diesel to its own stations at Sh124.50, the Star established, a few cents off the recommended pump price of Sh125.50 per litre in Nairobi.

The Kenya Independent Petroleum Distributors Association (KIPEDA) yesterday said its members have completely not accessed product since the shortage hit the country in the last week of March.

Major Oil Marketing Companies (OMCs) were accused of strictly channeling the three key products–petrol, Diesel and Kerosene to their franchisees, with some hoarding as they awaiting new prices which were revised upwards by Sh9.90 last week.

There has also been claims of increased exports to neighbouring countries where OMCs earned their cash on sales, as opposed to waiting for compensation from the Kenyan government fuel subsidy kitty.

“We were meant to believe that it (fuel) would be released after the price change but nothing has happened. We still don't have access to wholesale sales by the major players,” KIPEDA chairman Joseph Karanja told the Star on telephone yesterday.

While the Energy Ministry notes that the supply is yet to get back to normal, majority of petroleum retails stations across the country were carrying out business as normal as of Monday, it said in a statement yesterday.

“The long queues witnessed in the past two weeks were gone,” the CS Monica Juma led ministry said in an “update on the petroleum supply situation” document.

CS Juma had on April 14 assured the country of restoration of normalcy within 72 hours (three days), as imports continued to increase.

As of April 18, afternoon, the total petroleum stock held by the Kenya Pipeline Company was 52.9 million litres of petrol and 82.2 million litres of diesel, the ministry noted yesterday, enough for up to two weeks.

This is however less than 20 per cent of the total KPC holding capacity of 858 million litres across its facilities in Mombasa, Nairobi, Nakuru, Eldoret and Kisumu.

"The government, once again reiterates that there is adequate availability of the products at the points of use," it added.

Meanwhile, the Director of Criminal Investigations (DCI) is investigating companies reported not to maintain minimum operational stocks or have been hoarding products in the past two weeks.

The Energy and Petroleum Regulatory Authority (EPRA) has also warned OMCs against selling fuel products to independent dealers at the retail pump prices.

It is also hunting retail stations selling above the recommended prices with at least four in Migori, Kehancha, Awendo and Isebania identified on Sunday.

“Stern action will be taken against the operators and on this note, we encourage consumers to immediately report any price non-compliant retail stations to EPRA for action,” the ministry said.

Petroleum wholesalers and retailers are also encouraged to report to EPRA those OMCs offering product for sale at exorbitant prices at the wholesale level.

The process of reallocating of import capacities among OMCs is ongoing, the ministry said, and will be completed by April 21.

The government is keen to have the National Oil Corporation of Kenya import at least 30 per cent of the volumes which will reduce over reliance on independent dealers, and assure constant supply to independent dealers in the country.

Volumes are currently imported through the Open Tender System where the major OMCs compete and the winner imports on behalf of the market, at a fee.

They then access the products directly to their depots through the KPC which is only a transporter.

The shortage has seen a litre of petrol trade at a high of Sh300
Business
1 month ago
WATCH: The biggest news in African Business
by MARTIN MWITA Business Writer
Kenya
20 April 2022 - 08:34