Shilling has shrunk 2.1 per cent against the greenback this year 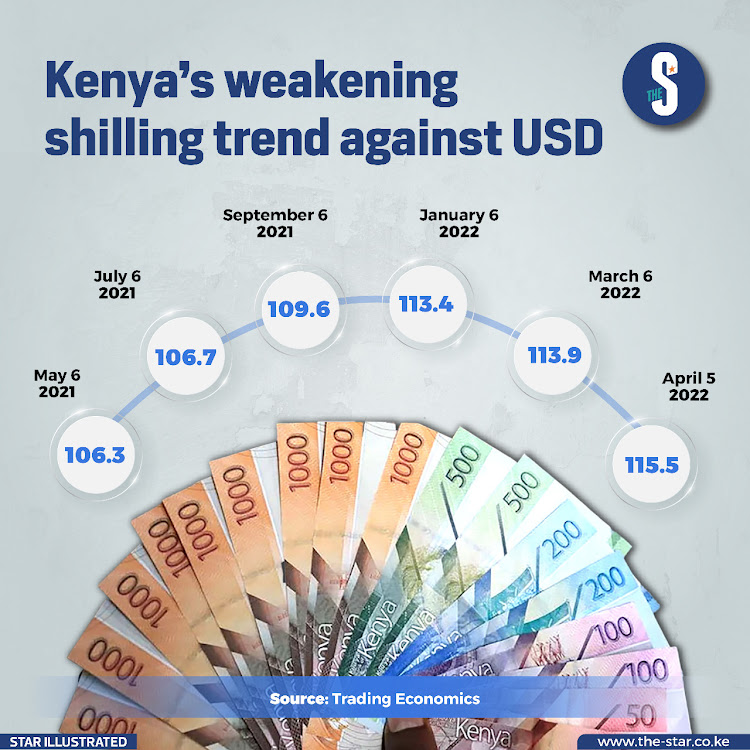 The country is staring at a shortage of basic commodities in the market which is likely to worsen the high cost of living on a low dollar supply in the market.

The inadequacy of the greenback in the market has seen commercial banks cap the amount a single person can buy at Sh100,000, with some withdrawing the dollar selling option at their forex counters as at Thursday.

Importers who talked to the Star said they fear that they won't manage to bring in new stock on time.

''I spend an average of $7,000 (close to Sh800,000) to bring in electronics from Dubai. The little stock I had will end by Friday next week. How can I import when a bank only allows me to buy a limit of $1,000,'' Dan Wareru who operates a store along Munyu Road in Nairobi said.

He added that some forex bureaus are taking advantage of the desperate situation to sell the US dollar at an extremely high rate. Says he managed to buy some $500 at Sh118 a unit along Kimathi Street.

His sentiments are echoed by Jane Kago who operates JK designs at Imenti House in Nairobi Central Business District.

"I buy clothes in US dollars from Malaysia and Dubai. I have been at Equity Bank, National Bank and KCB but only managed to get $1,500. I need at least $4,000 to bring in my next stock,''Kago said.

The US dollar demand my importers has been rising since the beginning of the year, pushing the shilling to the lowest levels ever.

The Central Bank of Kenya however, downplayed the currency depreciation, saying the shilling remained stable against major international and regional currencies in the week ended April 14.

The dollar shortage and disruption of global supply by Covid-19 and ongoing hostility between Russia and other global superpowers over  Ukraine invasion is set to hit hard net importing nations like Kenya.

The Kenya Association of Manufacturers (KAM) said on Thursday that the lack of access to hard currency is negatively affecting their ability to settle obligations to overseas suppliers in a timely manner.

KAM said this has strained relations with suppliers, at a time competition for raw materials has intensified globally due to rising demand amid lingering supply chain constraints.

“Many of our members have had challenges accessing dollars from their banks to meet their international commitments in a timely manner. This is putting a strain on supplier relations and the ability to negotiate favourable prices in spot markets,’’ said KAM.

In a statement, the manufacturers' lobby named metal and grain especially wheat and maize as some of the products getting out of stock.

Consumer prices rose 0.85 per cent month on month in March on a seasonally-adjusted basis, markedly up from February’s 0.41 increase.

This is attributed to the acceleration in food and non-alcoholic beverages prices, while transport prices also grew at a faster rate.

Inflation came in at 5.6n per cent in March, up from February’s 5.1 per cent. Still, annual average inflation was stable from February six to March.

FocusEconomics Consensus Forecast panelists expect inflation to average 6.2 per cent in 2022, which is up 0.1 percentage points from last month’s forecast. For 2023, the panel sees inflation averaging 5.5 per cent.

According to IMF, up to 73 countries, including Kenya, are eligible to seek debt relief but only three have requested so far.
Business
1 month ago

Overall PMI dropped from 52.9 in February to 50.5 in March
Business
1 month ago

Country's debt increases by Sh40b any time the shilling drops a unit against US dollar.
News
1 month ago

The country's debt increases by Sh40 billion any time the shilling drops a unit against the US dollar.
Business
1 month ago

Food and fuel prices push up March cost of living

The month-to-month food and non-alcoholic beverages Index increased by 1.49 per cent between February and March.
Business
1 month ago
by VICTOR AMADALA Business Writer
Kenya
18 April 2022 - 04:00