This has commodity prices increase by a high of Sh200 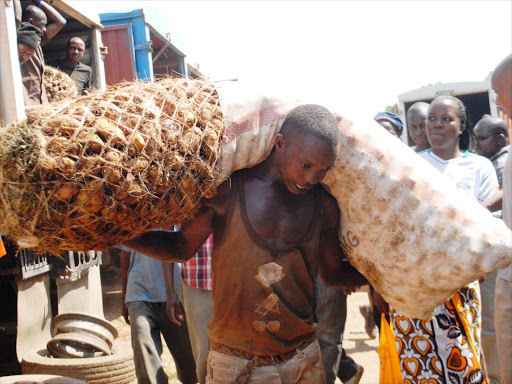 A man carries a sack of potatoes to the market. The government has outlawed packaging of potatoes in a more than 50kg bag.
Image: FILE

The cost of transporting fresh produce has shot up by over 30 per cent in Kinangop and Naivasha due to high fuel prices and the shortage crisis recently witnessed in the country.

Transporters have been forced to hike their prices noting that petrol stations have also increased their unit costs.

This has led to a rise in the cost of vegetables, milk and eggs in the local markets with some trading centers facing an acute shortage of the products in the last two weeks.

The situation has been worsened by the high prices of fertilizer and the harsh weather conditions that have adversely affected farming.

According to a survey, the price of a bucket of potatoes is going for Sh800 from Sh600, peas at Sh160 to Sh120 while tomatoes are retailing at Sh20 for three.

Jack Kuria from South Kinangop Farmers Association says they were incurring huge losses in ferrying their produce to the market.

He noted that transporters had pushed the transport cost since the fuel crisis started two weeks ago forcing them to add the product prices.

“We have been forced to increase the prices of food prices due to a rise in transport cost and this is adversely affecting the agriculture sector,” he said.

On his part, Salaton Kinyanjui from the Maella area said that the fuel crisis had paralyzed transport in the agriculture-rich region leading to a shortage of food in nearby towns.

He termed the transport charges as exorbitant accusing some of the transporters of taking advantage of the increase in global fuel prices to unfairly charge the farmers.

“We have seen a trend where farmers cannot ferry their produce to the market due to the fuel crisis leading to an acute shortage of food in the market,” he said.

A trader Danson Kimani said that they were rationing their sales for the last one week so as to meet the demands of all their customers.

He termed the demand as high against supply noting that this was affecting both the consumers and producers mainly due to an acute shortage of fuel.

“We have recorded a sharp drop in vegetable, eggs and milk supply and this has pushed the prices up with farmers unable to meet their demand due to recent fuel shortage and subsequent high prices,” he said.

The acute fuel shortage in the country in the past two weeks was occasioned by a row between the government and the oil marketing companies over a delay in the disbursement of subsidy compensation.

The government has committed to pay the outstanding arrears of Sh14 billion by tomorrow (Tuesday).

Post a comment
WATCH: The latest videos from the Star
by GEORGE MURAGE CORRESPONDENT
Kenya
17 April 2022 - 21:00
Read The E-Paper