The Kenya Accreditation Service says this is in a bid to maintain integrity.

•Move also aimed at enhancing consumer protection and fight against fraud and other vices.

•The company can seek fresh mandate and award appropriately after being cleared of any wrongdoing. 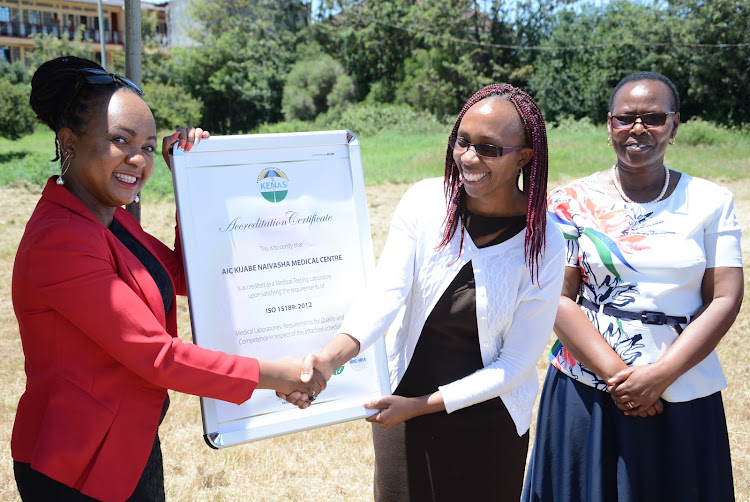 Credentials held by blacklisted companies must be scrapped pending investigations and conclusion of the offense committed, the state corporation in charge of accreditation has said.

The Kenya Accreditation Service (KENAS) said this is in a bid to maintain the integrity of local and international certificates, enhance consumer protection and fight against fraud and other vices. According to the agency, once the integrity of a company becomes questionable, ISO certificates or any accreditation must be suspended to protect consumers and businesses. “The company can seek fresh mandate and award appropriately after being cleared of any wrongdoing,” the agency said.

Kenas was established in 2009 to carry out accreditation of conformity of assessment services, which include calibration, product testing, proficiency testing laboratories, inspection, verification and certification bodies in all the economic sectors.

It is a State Corporation re-established by the Kenya Accreditation Service Act 2019 (Act. No 17 of 2019 ) as the sole national accreditation body for Kenya.

Last month, the Kenya Bureau of Standards (Kebs) distanced itself from ISO certification held by a blacklisted firm it recently invited for a vehicle inspection tender.

In a statement to the Star, the standards body said it is not the only body offering ISO certification, adding that it is not responsible for the one held by the East Africa Automobile Inspection company (EAA).

“Kebs is not the sole agency that issues ISO 9001 Certification to organizations, for the case of EAA they were not certified by KEBS and therefore there is no linkage of the two (certification and debarment),” Kebs MD Bernard Njiraini said.

He added that he is not at liberty to comment on EAA, its ISO certification, debarment, or any other firm that participated in the tender that has since been awarded to a successful bidder.

“On the matter of EAA, the tender for a motor vehicle is already concluded and awarded. It is not prudent to discuss EAA who were not awarded a contract as it is also not ethical to discuss,” Njiraini told the Star.

The standards body declined to reveal the ultimate winner of the tender.

ISO certification was one of the requirements for the much delayed multi-million restricted tender.

Even so, Kebs invited several firms with suspicious qualifications while World Bank and the Public Procurement Administrative Review Board (PPARB) debar others over alleged tender fraud.

The suspected favoritism and total disregard of procurement regulations saw the tender delayed for a year, with the last tender floated for January 27,2022 deadline.

The contract was first advertised in January last year but was never awarded in unclear circumstances, even though contracts for the firms undertaking inspections for Kenya abroad had lapsed.

The tender has been postponed thrice in the past three months only.

According to Kebs, the new Covid-19 variant (Omicron), the festive season and the travel restrictions imposed by airlines “ made it difficult to beat the tender deadline of January 6, 2022.”

EAA is one of debarred firms that were invited for the tender.

The National Treasury CS Ukur Yatani debarred for the years but it rushed to court where it obtained orders staying the debarment pending the hearing and determination of the suit.

It was debarred for alleged falsification of documents in previous contract.

The decision to debar EAA was arrived at after various investigative agencies including the Directorate of Criminal Investigations in conjunction with Interpol, the National Assembly’s Public Investments Committee and the Auditor General separately concluded that the firm was involved in falsification of its bid documents.

Also invited to bid for the contract is Auto Terminal Japan limited (ATJ).

The company is embroiled in a vicious court case with PPARB fighting debarment for alleged falsification of documents.The Auditor-General, the DCI and PIC also alleged forgery of bid documents by ATJ to win previous multi-billion shillings Kebs contracts for motor vehicle inspection.

The tender specifications favoured type A certified firms seen as the most independent inspection companies as they are not affiliated with any manufacturers or suppliers of a similar product.

“We are looking for an independent body devoid of any conflict hence type C is not admissible,” Njiraini said in an addendum dated December 20, 2021.

Kebs on the spot over multi-billion vehicle inspection tender

The tender has been re-advertised multiple times since January last year.
Business
4 months ago

It has for instance developed over 10,000 standards
Business
5 months ago
WATCH: The biggest news in African Business
by VICTOR AMADALA Business Writer
Kenya
11 April 2022 - 04:00