The sector which was most affected by the pandemic contributes 4.6 per cent to the GDP

•When the closure was lifted by the government they moved very fast and are now almost performing as per before the pandemic. 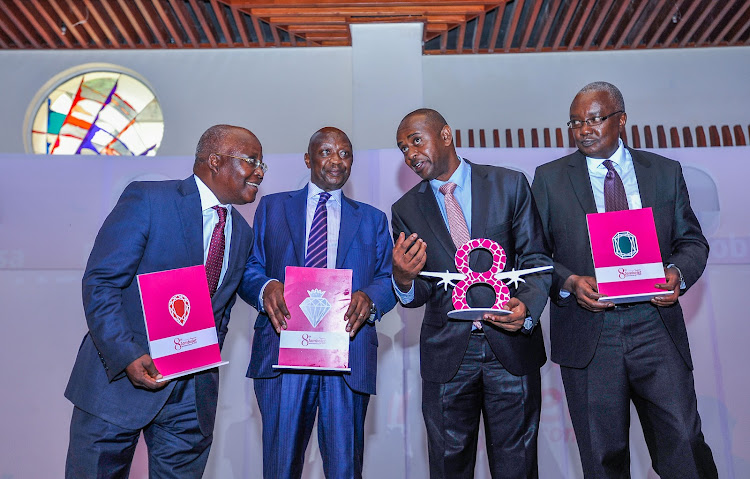 Kenya’s aviation sector operations are back to 94 per cent after the disruption caused by Covid-19, according to Transport Principal Secretary  Josep Njoroge.

Njoroge said the sector was the among the hardest hit but from his own assessment and experience its recovery has been been impressive.

“When the closure was lifted by the government they moved very fast and are now almost performing as per before the pandemic and already at 94 per cent of the Covid domestic travel, that’s a very fast recovery,” said Njoroge.

The PS attributed the increase in travel to the Health ministry's progressive administration of the Covid-19 vaccine.

Data by the ministry of health as at April 1, 2022 shows that 17.3 million vaccines have already been administered with more than 8 million Kenyans fully vaccinated.

Speaking during the Jambojet launch of a loyalty program, Njoroge lauded the low cost regional airline for their contribution to the growth of Kenya’s aviation sector.

The airline also marked eight years since in inception.

“Since Jambojet’s entry in 2014, we have seen the number of air travellers increase by an average of seven percent year-on-year," said Njoroge.

He said the airline has a do date flown more than 4.9 million passengers in the 10 routes it operates in Kenya.

The loyalty programme dubbed ‘Jambojet Rewards’, will see passengers redeem points on flights, baggage or other ancillary, priority check-in and baggage handling, discounts on Jambojet services among others.

''We conduct research studies with our customers to understand their perspective on the areas we are excelling at, and where they would like to see an improvement,"said Karanja Ndegwa, Jambojet MD& CEO.

He said the loyalty program is an area that keeps coming up and the team has been working on it over the past two years,''

The International Air Transport Association (IATA) financial outlook that was released in June 2020 estimates that revenues for airlines globally fell by 50 per cent to $419 billion from $838 billion in 2019.

According to the report, in Africa alone, the GDP supported by aviation was estimated to fall by up to $35 billion with over 3.5 million job losses estimated in August 2020.

Travelers who have recovered from an active Covid-19 infection are exempted from the directive.
News
2 months ago

How Africa can cushion its aviation sector in post-Covid recovery

Partnerships with other industries remains key for airports..
Business
2 months ago