•Overal, the bank's net interest for the review period shot 25 per cent to Sh68.8 billion from Sh55.1 billion on growth of loans and investment in government securities. 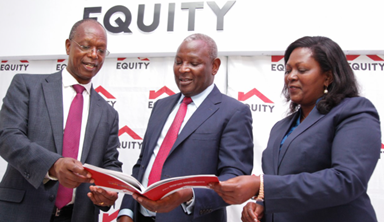 Equity Group recorded a 99 per cent profit after tax driving its earning to Sh40.1 billion for the year ended December 2021 as new subsidiaries started paying off.

The earnings solidify the group's position as the most profitable bank in Kenya for the second year in a row.

Its main competitor, KCB posted a net profit of Sh34.2 billion over the same period.

It is on the strength of his performance that shareholders will take home Sh11.32 billion as dividend.

They will be paid Sh3 per share, a 50 per cent increase after a two year freeze on dividend payment due to the impact of Covid-19 on the economy.

ROAE is a financial ratio that measures the performance of a company based on its average shareholders' equity outstanding.

EquityBCDC contributed 47 per cent in asset increase at Sh419.8 billion against the groups overall of Sh1,304.9 billion.

The subsidiary followed the acquisition of majority shareholding of Banque Commerciale du Congo (BCDC) by Equity Bank Congo in July 2020.

Overall, the bank's net interest for the review period shot 25 per cent to Sh68.8 billion from Sh55.1 billion on growth of loans and investment in government securities.

Equity CEO James Mwangi while announcing the results on Tuesday attributed the asset growth to corresponding increase in customer deposits which accelerated to Sh959 billion from Sh740.8 billion in 2020.

"We have strengthened our business model to achieve an embedded shared value concept in our twin engine of social and economic aspirations and deliverables," Mwangi said.

He said the bank has scaled its social and environmental impact investments in capacity building and enhancement through education, health, and entrepreneurship training.

Trade finance registered a 55 per cent growth in revenue to Sh3.2 billion from Sh2.1 billion in 2020.

The bank has launched a Marshall Plan Africa Recovery and Resilient plan with a Sh690 billion seed fund for the private sector.

The strategy aims at funding and financing five million businesses and 25 million households in Africa.

According to the Brand Finance Banking 500 2022 Annual Report released in February, Equity Group is among the few banks from smaller and emerging markets to join a total of 30 new entrants into the top 500 banking brands.

The growth is also linked to falling provisions for bad loans.
Business
7 months ago

Net loans are up 23 per cent to Sh559 billion.
Business
7 months ago