The second hand clothes are cheap.

•The government is perceived to maintain a lax attitude towards the secondhand market as it is a beneficiary of AGOA .

•Kenya's second-hand clothing imports have been going up over the years. 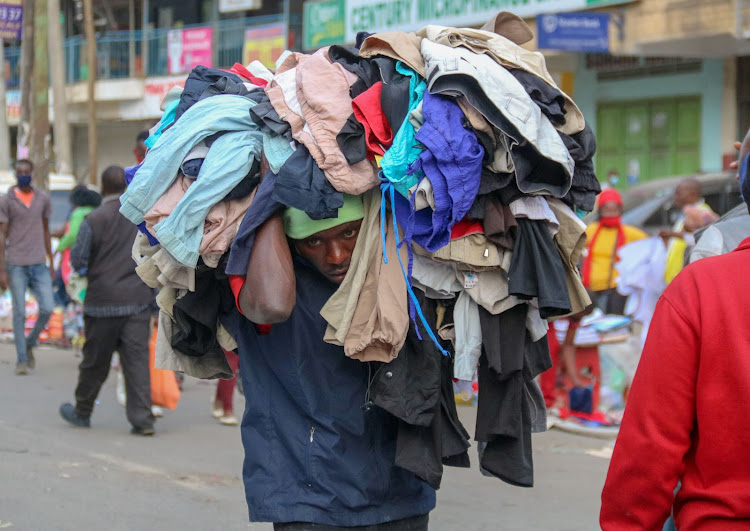 Kenya's local fashion industry is a dynamic enterprise as it constantly evolves in different aspects including creativity and global trends.

It has a huge potential for creating jobs and economic opportunities.

However, competition from second-hand clothing imports and slow adoption of technology remains a major challenge.

The Kenyan Fashion Industry Needs Analysis Report 2022 commissioned by the British Council in Kenya, however, notes there could be an opportunity to increase market share by creating awareness for products ‘Made in Kenya’.

“Fashion and creative industry players should work with the government to create an industry that is credible, dynamic, and economically sustainable," Akinyi Odongo, Kenya Fashion Council chairperson said.

Akinyi added that they have the opportunity to design their strategies around the new realities in the global market and become shapers in the fashion sector.

There is a taste preference for western-like apparel among the urban population.

Global fashion trends pick up fast in the local market and there is no definite Kenyan traditional attire or garment style as is the case with most countries in the East African Community such as Uganda, Tanzania, Ethiopia and Rwanda.

Like the urban population, the rural population does not show any preference for locally produced wear despite being somewhat conservative.

By observation, the apparel shops in urban areas have a preference for western-like apparel, which is fast-moving, unlike African print-themed outfits which are often ceremonial for occasions like graduations, parties, and weddings.

This market however has to contend with second-hand clothing that is easily accessible to all customers at very affordable prices, while providing variety and quality.

The secondhand market is also dependent on street vendors who have access to a wide customer base, as they are strategically located in the city center, at bus stops, bustling neighborhoods and streets and offer additional delivery options to homes and offices.

It is their flexibility, ease of movement, and affordability that further drive the sale of their products.

The price range of the second-hand clothing varies for all income groups with some as low as Sh 30.

Most of the second-hand clothing is sourced from the United States according to dealers and observers.

The government is perceived to maintain a lax attitude towards the secondhand market as it is a beneficiary of the African Growth and Opportunity Act (AGOA), which gives them access to duty-free, quota-free access to the United States.

“The biggest constraint on the fashion industry is mitumba. For as long as you have countries full of second-hand clothes, you have suppressed demand and a supply chain that has been killed. Regulating second-hand imports will create more commercial opportunities and outward growth of the industry,” said a Kenyan designer.

Available statistics on second-hand clothing imports shows volumes have been increasing over the years and stood at 134,000 tonnes in the first three quarters of 2018, up from about 101,066 tonnes in 2013.

Second-hand clothes enjoy popularity and preference due to qualities such as affordability, wide variety, quality apparel, and also the presence of high-end designer apparel and leather products.

For instance, while apparel and accessories from high-end brands such as Versace and Gucci can be expensive when sourced new from the chain outlets, they are available in the second-hand market for as low as Sh 1,000.

For leather products, there is a perception of quality in the second-hand market.

There are poor policy implementation strategies that promote uptake of the local fashion industry in the East African region.

This is in spite of initiatives to promote locally made products and raising of taxes on imports.

In 2017, in a bid to encourage uptake of local apparel, the government introduced the initiative ‘Buy Kenya, Build Kenya’.

The strategy included reserving 40 per cent of public procurement for local goods and campaigns to educate and promote made in Kenya.

This has continued to expose Kenyan fashion designers to stiff competition not only from large-scale import of second-hand clothes, but other cheaper imports under the economic realization program.

The Kenya Vision 2030 which is Kenya’s blueprint towards a globally competitive and middle-income nation by 2030 measures, in support of SME that could impact the fashion industry, has been faulted with designers.

Their argument is that interventions are skewed towards large and medium enterprises in the industry, and are unlikely to impact their performance, profitability, and relevance in short term.

SMEs seeking to invest face challenges among them low access to financing.

Even when they secure loans, the interest is high.

While a majority of designers in the Kenyan fashion industry are involved in apparel production, with an estimated 70,000 apparel manufacturing firms, most of them are small-scale operations and often not full-time occupations. Some are unregistered entities.

According to research conducted by Fashion DNA reports, Nairobi has about 60 per cent of the country’s overall GDP, cosmopolitanism is based in the capital and other urban and developed cities such as Mombasa, Kisumu and Nakuru.

The choice of location is informed by aspects such as the city's disposable incomes, appeal for fashion, and access to markets.

With a population of over 48 million, the local domestic market remains the main target audience for Kenyan fashion SME products.

The Kenyan textile and clothing industry is estimated to represent 0.6 per cent of GDP and six per cent of the total manufacturing sector.

The once Kenyan factory giant, Rivatex, collapsed a couple of decades ago due to corruption and mismanagement and was later purchased by Moi University.

Last year, the Kenyan government and the Indian investment bank-Exim, pumped Sh 6billion into its revival, which included modernisation and increasing capacity.

The firm targets a workforce of 3,000 employees with new production lines, up from the current 600.

Rivatex is partnering with local farmers and ginneries to boost the production and consumption of cotton.

This includes a drive to provide farmers with free cotton seeds and pesticides.

An analysis by Kenyan-based East-African consulting firm, Msingi,  estimates that the East African textile and apparel industry could reach 80,000 jobs in 2025 and 200,000 in 2030.

Africa is currently estimated to account for about one per cent of global apparel export, according to World Trade Organization data.

The Kenyan fashion industry has been featured on global media platforms, including renowned magazines and television networks.

However, designers face challenges in storytelling and defining their brand story effectively and confidently.

This is blamed on the lack of strong branding to compete in the global market, a challenge that also continues to drive the perception that imported clothes are superior to ‘Made in Kenya’ brands.

Her gowns are sometimes used in beauty contests and pageants.
Sasa
3 months ago