EGMS was first introduced on alcoholic drinks and cigarettes in 2013.

•A recent study by the Anti-Counterfeit Authority conducted between October 2019 and February 2020, indicates that illicit trade denied Kenya Sh103 billion in revenue in 2018. 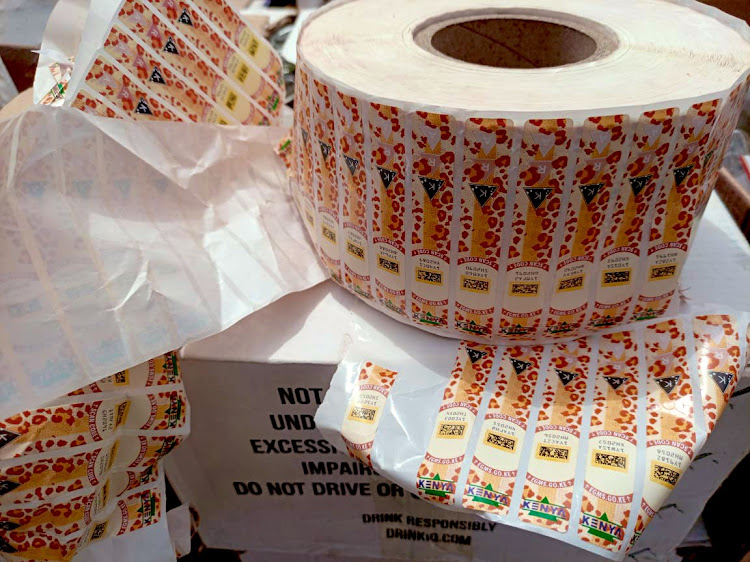 The taxman has completed the rolling out of the latest version of excise stamps implemented in three phases.

The first phase was rolled out on alcohol products in early December, followed by the second phase on soft drinks and water towards the end of December.

The last phase was tobacco and Keg beer products, which was done in February this year.

“Currently we are at version four which we have completed the full roll-out .We continue to review the security features to ensure we are using the latest technology available,” said Linstrom Kinoti, project manager, Excisable Goods Management System (EGMS).

He spoke during a media sensitization on rollout of the new generation stamps, in Nairobi.

EGMS was first introduced on alcoholic drinks and cigarettes in 2013 with , a contact that was awarded to Swiss company–SICPA.

The stamps have had three reviews with the fourth coming in December last year, where security features have been enhanced.

The new generation is expected to boost revenues while protecting legit industries from counterfeits.

Last year, there were concerns the Kenyan retail market was flooded with fake excise stamps, which was fuelling growth of illicit trade, mainly on excisable goods.

The rise in fake stamps (imported) was reported mainly in alcoholic beverages, non-alcoholic drinks including juices, water and cigarettes, with illicit trade denying the taxman billions in potential revenue.

“Trade in illicit goods, substandard and counterfeit products is a major challenge facing manufacturers, and the country at large,” Kenya Association of Manufacturers CEO Phyllis Wakiaga told the Star.

The association has been working with KRA among other agencies to curtail circulation of the same in the market, as part of the Multi-Agency Team against illicit Trade.

A recent study by the Anti-Counterfeit Authority (ACA), conducted between October 2019 and February 2020, indicates that illicit trade denied Kenya Sh103 billion in revenue in 2018.

A national survey by ACA in 2019 revealed that the value of illicit trade in Kenya is at about Sh726 billion.

“Counterfeiters look at fast moving goods,” ACA acting executive director Fridah Kaberia said, “ If we can deal with illicit trade in the country, we can create space for local manufacturers to grow.”

Counterfeiting which is eating into genuine brands' market share, including local producers, has seen at least 44,000 jobs lost in the country every year mainly in manufacturing, the agency notes.

About 80 per cent of counterfeit imports coming into the country are from South East Asia ACA says, with China accounting for more than 60 per cent of the number of goods seized overall.

Yesterday, KRA said it has enhanced market surveillance, working with a multi-agency team including Kebs and the Anti-Counterfeit Authority (ACA).

It has asked consumers to verify products using the “Soma Label” application.

“We do expect the measures that KRA is taking to enhance the EGMS will lead to a significant increase in taxes,” Kinoti said.

Meanwhile, the East African Community is in talks to harmonize domestic taxes which includes VAT, income tax and excise, to curb smuggling of products which are cheaper in neighbouring countries.

The region has a harmonized customs duty.

The voluntary tax disclosure programme brought in Sh5.9 billion in collections from 6,690 applications.

KRA surpassed both the overall and exchequer targets in December 2021 by Sh10.152 billion and Sh8.257billion respectively.

During the first half of the Financial Year, customs revenue sustained its excellent performance after collecting Sh355.8 billion against a target of Sh322.7 billion, the taxman says,  reflecting a revenue surplus of Sh33 billion.

The customs revenue recorded growth of 19.5 per cent in the period under review.

The domestic revenue collection was at Sh 618.3 billion against a target of Sh603.9 billion.

The agency has warned of a possible rise in counterfeits during the festive season.
Business
5 months ago