The country's gross debt rose from Sh7.9 trillion in September to Sh8.206 trillion 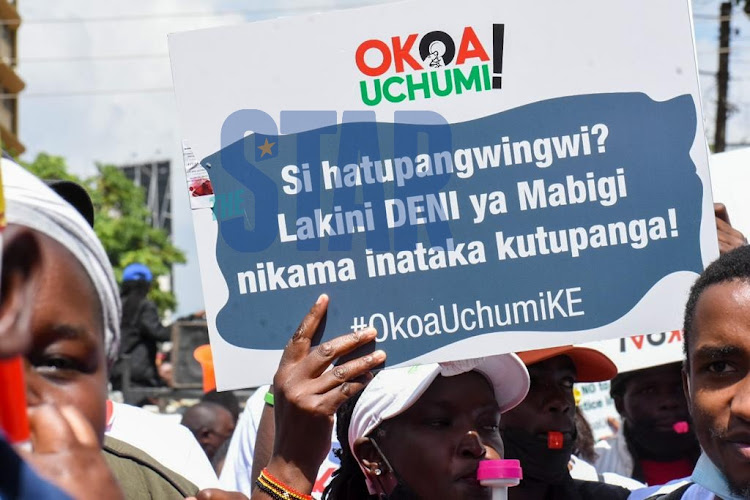 Members of the public together with OKOA Uchumi conveners lift placards with different information outside the National Treasury house during a peaceful demonstration on December 9, 2021.
Image: MERCY MUMO

At least Sh77 out of Sh100 of Kenya's Gross Domestic Product (GDP) is in debt, according to the latest data by the National Treasury.

Kenya's debt registry as of the end of last year shows gross public debt crossed the Sh8 trillion mark to stand at Sh8.2 trillion against the country's nominal GDP estimated at Sh10.7 trillion.

This means for every Sh10 earned from the sale of goods and services in the country, Sh7 covers loans, illustrating Kenya's high level of indebtedness which is likely to worsen on growing volatilities in the global market.

Kenya's Public and Publicly Guaranteed Debt, December 2019 to December 2021 shows the country's gross debt rose from Sh7.9 trillion in September to Sh8.206 trillion, with external loans accounting for over 50 per cent of the bulk.

The exchequer has also included suppliers' credit in the debt registry for the first time in line with the International Monetary Fund's order.

Data shows suppliers' credit to the government shrunk to Sh12 billion end of last year compared to a similar period the previous year.

Domestic debt on other hand rose from Sh1.58 trillion in 2019 to Sh2.03 trillion end of last year. A similar amount is owed to non-banks and residents.

The country's public debt has grown tremendously in the past eight years of President Uhuru Kenyatta's administration, largely pushed up by huge infrastructural projects led by the Standard Guage Railway which goggled in excess of Sh300 billion.

The country has taken four Eurobods in less than a decade and is currently planning for a fifth one worth Sh250 billion.

In January, a treasury mandarin told a local paper that it is banking on Citi Bank and JP Morgan to arrange its fifth Eurobond to be issued this year.

In October last year, a report by the Senate Committee on Finance on the status of Kenya's debt presented on the floor of the house showed the country's debt will be Sh8.7 trillion by end of the current financial year.

This will be only Sh300 billion shy of the Sh9.1 trillion debt limit, perhaps the reason why legislators want the debt ceiling pushed to Sh12 trillion.

The rising debt stock has resulted in a high debt servicing expenditure amounting to Sh1.17 trillion in this financial year up from the projected Sh952.7 billion.

In the first six months of the financial year, the government according to the Treasury data spent Sh39.4 billion to service external debt, largely to China.

According to the External Debt Service, from July 2021 to December 2021, Sh27.61 billion was paid in principal and Sh12.69 billion in interests.

At least 29.68 billion went to China, accounting for 76 per cent of the external debt service during the period under review.

Kenya paid Sh5.38 billion to Italy in debt service linked to scandalous Kimwerer and Arror dams. Others are Belgium and Germany at Sh1.08 billion and 1.04 billion respectively.

Although the Kenya Revenue Authority (KRA) has stepped up a vigorous tax collection campaign that has seen it surpass its monthly collection targets since August last year, the amount does not meet budgetary needs.

According to the Senate report, the government is spending more than 60 per cent of its tax revenue to repay debt, a move it terms as highly unsustainable.

Kenya's debt has been under sharp focus in recent times, with international lenders and rating firms like IMF, World Bank, Moody's and S&P downgrading its creditworthiness.

Half of revenues collected by KRA to settle public debts

The National Treasury has allocated Sh930.35 billion to repay dues
News
1 year ago
Post a comment
WATCH: The latest videos from the Star
by VICTOR AMADALA Business Writer
Kenya
22 February 2022 - 04:00
Read The E-Paper