Work at the terminal is at 97 percent and it should be ready by March.

-On Wednesday, the Energy and Petroleum Regulatory Authority (Epra) and National Petroleum Authority of Ghana are also scheduled to visit the Oil Terminal.

-The project consists of one offshore island terminal with four berths, whose total length is 770m. 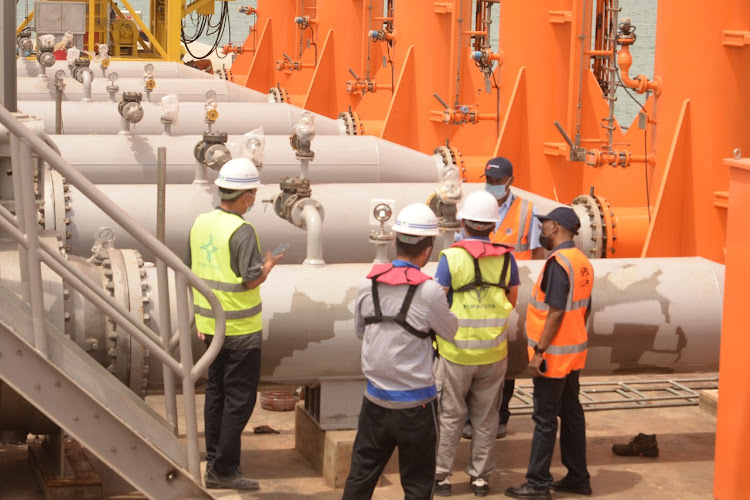 The terminal, whose construction work is currently at 97 percent is expected to be ready for testing and commissioning by end of March this year, according to Kenya Ports Authority.

“They expressed their satisfaction that the facility will increase business and efficiency once completed,” said KPA in a statement on Tuesday.

On January 6, President Uhuru Kenyatta inspected the facility, which he said it will be a game changer in Kenya’s petroleum handling business.

He said the new terminal will save Kenya a  Sh2billion per year in demurrage charges.

The Energy and Petroleum Regulatory Authority (Epra) is also scheduled to visit the Oil Terminal accompanied by the National Petroleum Authority of Ghana on Wednesday.

They will familiarise themselves with the new terminal which is the biggest in the region.

The new terminal is an offshore facility located at the Port of Mombasa, opposite the existing Kipevu Oil Terminal.

The project consists of one offshore island terminal with four berths, whose total length is 770m and one work boat wharf at Westmont area for landing facilities.

It also has five sub-sea pipelines buried 26 meters under the seabed to allow for future dredging of the channel without interfering with the pipes.

Once complete, the new facility will have four berths capable of handling six different hydrocarbon import and export products.

It is also fitted with a Liquified Petroleum Gas  facility, crude oil and heavy fuel oil and it also has provisions for handling t aviation fuel,  diesel and petrol).

The terminal will for a start be able to accommodate three ships at a go with a capacity of 200,000 tonnes each.