•Currently, there are less than 2,000 wagons available for operations with each SGR freight train having a capacity of 4,000 tonnes and can carry 108 TEUs (containers).

•Countries with open access for rail include South Africa, Brazil and a number of European countries. 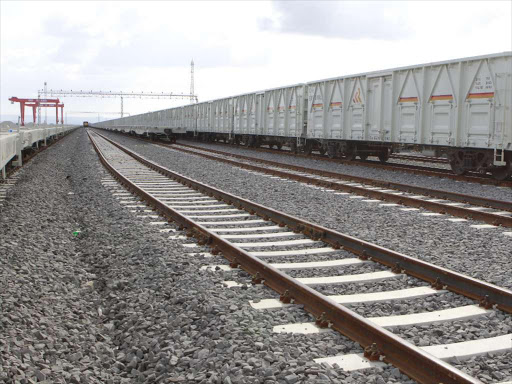 Wagons being hauled by the SGR cargo train/
Image: FILE

The private sector should be allowed to invest in freight wagons to increase cargo-handling capacity on rail, the Shippers Council of Eastern Africa (SCEA) now says.

This comes amid concerns of delays in cargo movement from the Mombasa port to the Nairobi and Naivasha Inland Container Depots.

Equally of concern is high freight charges on the Standard Gauge Railway compared to road transport.

Through the Council, players in logistics industry are proposing that they be allowed to purchase wagons and enter contractual arrangements with Kenya Railways on operations.

Currently, there are less than 2,000 wagons available for operations with each SGR freight train having a capacity of 4,000 tonnes and can carry 108 containers.

“We need to start thinking business. We should allow open access to railway. This means you can allow private sector to buy wagons and go into contract with Kenya railways which will run the engines,” SCEA chief executive Gilbert Langat said in an interview.

Countries with open access for rail include South Africa, Brazil and a number of European countries.

“When you do that, the private sector will invest in wagons instead of buying tracks. For example 10 wagons equals 20 trucks. This will increase capacity and reduce trucks on the roads,” Langat said.

Importers and exporters are currently reporting delays of between eight and 10 days on cargo movement between the port and the ICDs, which comes with demurrage and port storage charges.

The delays are related to hitches in the clearing and haulage of cargo.

This translates to about five trains, a boost to its operations, which picked in 2021 year after a slow down in 2020 due to a drop in international because of the Covid-19 pandemic.

"The wagons are back to full operations enabling daily average supply to the port of above 400 wagons for loading per day," managing director Philip Mainga said.

The corporation also deployed double-decker wagons last year to increase the amount of cargo ferried from Mombasa port to Nairobi and Naivasha, pushing up volumes handled by nearly a third.

The government is pushing for a mandatory SGR use policy, with all Nairobi bound and transit cargo being evacuated by rail from the port.

Traders in Kenya and Uganda are however opposed to the forced use saying rail freight costs are double those of road, and they should be allowed to choose their preferred mode of transport.

Importers however incur last mile transport costs from the ICD to industries and last destinations of up to $350 (Sh37,707).

This in addition to handling costs and other port usage charges push the total costing to about $900 (Sh102,105).

“If you add handling costs and the return of empty containers and other charges, it will end up to about $1230,” Langat explained.

Road transport from Mombasa to Nairobi and return of empty container costs an average $600-$800 (Sh 90,760), depending on volumes.

Kenya Railways is currently running tests on the SGR-Metre Gauge Railway, which will see cargo railed from Mombasa all the way to the border with Uganda.

“The government is out to ensure movement of cargo through rail system is efficient, reliable, safe and that is why the rehabilitation of the 465km is a landmark for us,” Mainga said on Monday.

While the council supports synergy between rail and road transport, Langat said there is need for close collaboration between the government and the private sector to improve the country’s logistics systems.

“Why the costs have been high is because lack of harmony and seamless network between rail and road. There should be close collaboration so that we have a smooth system running between the sea, rail and road,” he said.