This is enough to pay annual interest on the SGR loan.

•The new terminal, which is faster and more modern, will reduce the vessel turn-around time from four days to two days. 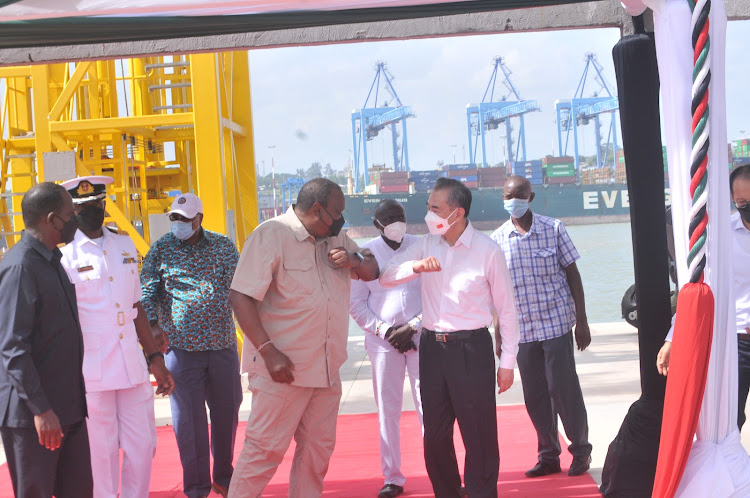 Kenya's new oil terminal will save demurrage costs of up to Sh16 billion annually, State House has said, enough to pay annual interest on the SGR loan.

This, as the country moves to become the biggest petroleum products handler in the region.

President Uhuru Kenyatta yesterday supervised works at the Sh40 billion facility at the Port of Mombasa which is 96 per cent complete.

According to Kenya Ports Authority, the new Kipevu Oil Terminal is expected to be ready and tested for operations by end of March 2022.

The project which began in February 2019 with a completion date of August last year was slightly slowed down by the Covid-19 pandemic that struck in March last year.

The annual savings of demurrage is approximately what Kenya will pay this year to the EXIM Bank of China in interest payments for the Sh324 billion SGR loan.

“Kenya can pay SGR interest loan payments every year with Sh16billion KOT will save in demurrage costs,” the Presidential Strategic Communication Unit said in a statement.

It is a 770 metre long offshore facility, which has five sub-sea pipelines that are buried 26 meters under the seabed to allow for future dredging of the channel without interfering with the pipes.

It is fitted with a Liquified Petroleum Gas (LPG) facility, crude oil and heavy fuel oil and also has provisions for handling three types of white oil products (DPK- aviation fuel, AGO – diesel and PMS – petrol).

The new terminal, which has a capacity to accommodate four ships concurrently with a capacity of 200,000 tons each, is being constructed by the China Communication Construction Company (CCCC).

President Uhuru was accompanied by China State Councilor and Minister of Foreign Affairs Wang Yi during the inspection of the facility.

Uhuru said the old Kipevu Oil Terminal, which was built in 1963, did not have the capacity to meet the demands of an increasing population and the growing economy of Kenya.

The old terminal can only handle one vessel at a time.

“For many years, we have struggled with the old terminal was not able to meet the demands of increasing population. We needed this new facility to cater to these new demands,” Uhuru said.

He said Kenya was forced to pay approximately Sh2 billion annually as demurrages to shipping companies because of the long waiting hours in the deep seas.

“With this new infrastructure, Kenya is going to save the billions paid as demurrages and those delays will be the thing of the past,” said the Head of State.

The new terminal, which is faster and more modern, will reduce the vessel turn-around time from four days to two days.

It will guarantee the security of the supply of fuel for the region and significantly reduce the freight costs, owing to improved cargo handling capacities and leverages associated with larger economics of scale.

“We believe with infrastructure, we are able to improve the ability of our people to do business,” said President Uhuru.

The new facility will also enhance LPG importation facilities, which will lead to a possible reduction of LPG costs and more LPG uptake in the country.

The Chinese Foreign Affairs Minister Yi, who is in Kenya for a two-day official state visit, said Kenya and China will continue to partner in many development projects.

“China has contributed immensely in modernization of African countries. We have built more than 100 ports, more than 1,000 bridges and tens of thousands of kilometres of roads. We will continue with this kind of partnership for the benefit of our people and Kenya,” said Yi.

The new KOT is listed as yet another President Uhuru's legacy project, together with the likes of the Nairobi Expressway, SGR, Lamu Port, and a number of road projects across the country.

Even so, questions abound how the cost of the Kipevu Oil Terminal shot up to Sh40 billion from an initial cost of Sh13 billion that had been given.

Once commissioned, KPA is expected to hand over the facility to Kenya Pipeline Company (KPC), which will operate the country's biggest oil tankers' berthing facility, that will replace the current 50-year-old Kipevu Oil Terminal.

KPC is expected to use its expertise in bulk fuel handling to grow both domestic and regional supplies, with Uganda being a key destination for exports.

Increased capacity and efficiency are expected to help Kenya regain lost market share lost to Tanzania through the Central Corridor, which connects the region’s landlocked countries to the Port of Dar es Salaam.

Kenya has lost about 20 per cent of its export business in recent years even as Uganda remains Kenya’s top export market for imported oil products (super petrol, diesel, kerosene and Jet A 1-aviat.

KPC has two major facilities in the Western region–the Eldoret depot and Kisumu depot with storage capacities of 48 million litres and 45 million litres respectively, with 70 per cent of exports going to Uganda.

Kenya has built an oil jetty in Kisumu to support exports.

The facility (Kisumu Oil Jetty) is however yet to become operational as the Ugandan side is yet to complete its infrastracture.

Post a comment
WATCH: The latest videos from the Star
by BY MARTIN MWITA AND CHARLES MGHENYI
Kenya
07 January 2022 - 04:00
Read The E-Paper