Chamber of Commerce to work with envoys to promote business

• KNCCI president Richard Ngatia on Monday said they value partnerships that are geared towards improving the Kenyan business environment.

•  Vice president Eric Ruto said KNCCI works closely with different embassies and through their support a lot has been achieved in enhancing international trade. 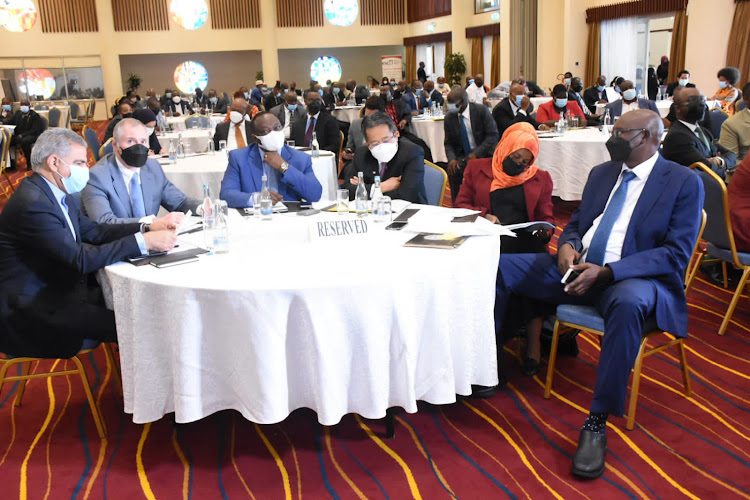 The Kenya Chamber of Commerce and Industry will continue working with foreign missions and international partners to support local businesses.

“We shall continue working with our partners, including the embassies in supporting the business community to thrive. It is important to highlight the direction we want as an institution,” Ngatia said during the chamber's National Governing Council meeting in Nairobi.

Ngatia said the partnerships have built and contributed to a vibrant business community.

The meeting shared the progress report and the chamber’s accomplishments in 2021 and initiatives and development plans in the New Year.

Vice president Eric Rutto said KNCCI works closely with different embassies in the country and their support and cooperation had enhanced international trade.

Among the invited guests were ambassadors Jafar Barmaki (Iran),  Pavel Vziatkin (Belarus) and Mohamed Saripudin of Indonesia and the chief guest at the event. The meeting was sponsored by the embassies of Belarus and Indonesia.

Ambassador Saripudin said his mission is committed to supporting both Kenya and Indonesia Chambers of Commerce in their endeavour to boost trade in the two countries.

“In 2018, Indonesia started to become more aggressive to look to Africa, especially Kenya, as the hub of the East African region. Since then, Indonesia has convened several initiatives in bolstering cooperation with Africa,” he said.

“In 2021, the embassy connected many Kenyan and Indonesian businesses, namely in pharmaceutical industries, such as vaccines, gloves, and syringes, in affordable housing, palm oil, fintech, and Fast Moving Consumer Goods that Indonesia is powerful at,” the envoy said.

Belarus Ambassador urged Kenyan businesses to tap into Belarusian technology in agriculture as they are a market leader in the industry.

He noted that trade between Kenya and Belarus has been low, due to lack of information about his country in Kenya.

According to data by the Belarusian embassy, bilateral trade in 2020 was $40.6 million, with the best performance in 2018 at $49.4 million. The decline is attributable to Covid-19 and the political instability in Belarus.

“Belarus is open for business with Kenya as we are a gateway to Eurasian economic bloc,” Ambassador Vziatkin said.

Belarus and Kenya chambers of commerce signed an MoU on July 15, this year.

The Iranian envoy termed Kenya as Iran’s most important partner in Africa and a key cog in his country’s foreign policy.

Barmaki said with Kenya-Iran enjoying 50 years of relations, there is a huge potential between the two states.

He said his mission has facilitated eight delegations to Iran to explore tea and coffee markets.