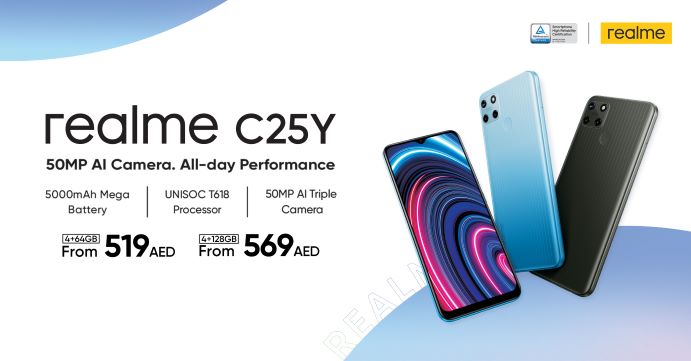 “The demand for high quality, reliable and high-performance phones that are budget-friendly is on the rise which has seen our C Series model at realme become the bestselling model in the market,” PR and Marketing manager, Realme Kenya, Mildred Agoya said.

She added that hence the launch of the new realme C25Y and addition to the C Series catalogue. In addition, a step towards the expanding footprint of the Realme brand across the Eastern Africa smartphone market.

As the first phone in the Realme C Series to feature a 50MP mode, it provides clearer shooting enabling users to put out large pixel photos.

With super power saving mode, users can still maintain the basic functionality of their phones by using six common apps even at low power keeping them always powered and connected.

It also features a screen battery optimization to increase the smartphone’s endurance by lowering some display effects and sleep Standby optimization to save power by instructing the phone to run on lower mode when users are asleep.

It is powered by an octa-core 12mm Unisoc T610 processor which clocks up to 1.8GHz that comprises of Arm cortex A75 operating up to 1.8 GHz and six Arm Cortex A55 running up to 1.8GHz.

It has adopted the line aesthetic design for the first time, which visualizes the abstract aesthetics of line and presents the arrangement of ‘line’ and ‘surface’ by the design method.