•According to the Insurance Regulatory Authority (IRA) approximately 40 per cent of all insurance claims are fraudulent. 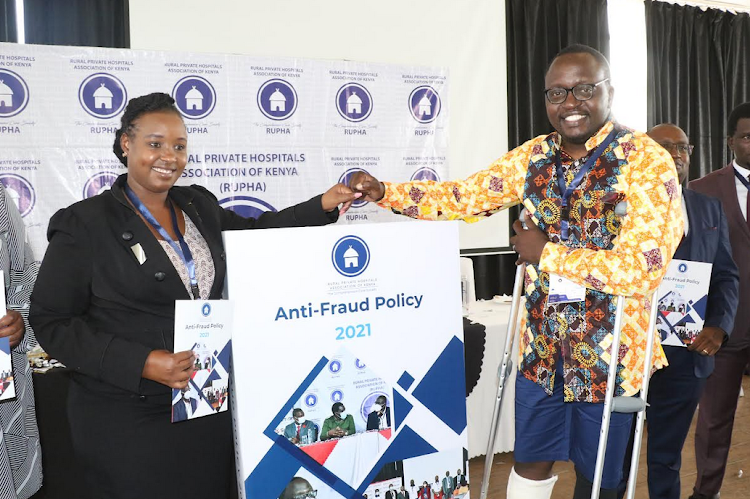 Judy Lagat of the Ethics and Anti-Corruption Commission with Rural Private Hospitals Association chairman Brian Lishenga, during the launch of the anti fraud policy to be adopted by the association's members/HANDOUT

Kenya loses up to Sh33 billion to insurance fraud in the medical segment alone, the Rural Private Hospitals Association has said, pointing out to weak systems and collusion.

This is about 27 per cent of the country's health budget which is Sh121.1 billion in the current financial year.

It can occur during the process of buying, using and underwriting insurance covers, which according to industry players, it is motivated by greed or financial distress.

“We still continue to witness as a country, a loss of billions where hospitals collude with clients to falsify claims. An instance is when a patient wants to bring a relative, not covered, to be treated. We also have situations where hospitals generate false claims,”association chairman Brian Lishenga said.

He said some facilities have been making claims for procedures not conducted, which amounts to fraud.

“There are cases where insurance companies also deny patients their rightful access to treatment yet patients have paid premiums for the services,” Lishenga noted.

He spoke during the association's annual convention in Nairobi.

According to the Insurance Regulatory Authority (IRA) approximately 40 per cent of all insurance claims are fraudulent.

There is an Insurance Fraud Investigation Unit in place that includes the Directorate of Criminal Investigation, which investigates cases in the market and brings culprits to book.

Yesterday, RUPHA also launched an anti-medical fraud policy to be adopted by all its members, mainly facilities in rural Kenya.

“With the policy in place, it will create confidence in the market, ethics and professionalism,” said Lishenga.

The loses in fraud come with increased claims which according to IRA data, insurance companies received over 2.1 million claims in the second quarter of 2021, a 19 per cent increase compared to the first quarter of the year (1.7 million).

Medical, motor private and motor commercial had the highest amounts of paid claims at 26.8 per cent, 22.3 per cent and 38.0 per cent respectively, of total industry paid claims under general insurance business.

The long - term Insurance business posted an 8.5 per cent increase in the number of claims reported to 91,978 compared to 84,801 claims reported in the first quarter of 2021.

“Our fear is that reducing this amount it is going to deny a lot of people medical care. It means you have Sh83 per person per year for outpatient. In stead of reducing, NHIF should have revised the amount upwards,” Lishenga said.

Post a comment
WATCH: The latest videos from the Star
by MARTIN MWITA Business Writer
Kenya
10 December 2021 - 04:00
Read The E-Paper