•The scheme backed by RBA and IRA targets at least 600,000 people In the first one year and over five million people in the medium term.

•About 17 million Kenyans, mainly in the informal sector, are without insurance or pension solutions. 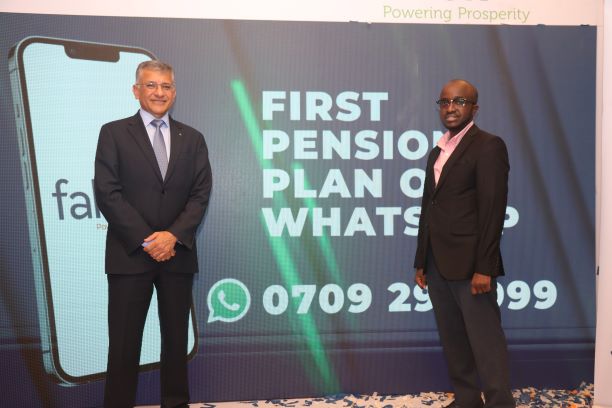 You can now save as little as Sh20 per day for your retirement benefits via WhatsApp.

The Zamara Fahari Retirement Plan account, was yesterday unveiled on WhatsApp, in a strategy to expand the reach potential savers without access to formal financial advice and services.

“Our target over the next five years is to have five million people on board,” Zamara Group CEO Sundeep Raichura said.

It is Africa’s first pension or savings plan on WhatsApp, with the  financial services provider targeting the informal sector with monthly savings of up to Sh300.

According to RBA, pension coverage is currently at 22 per cent of the total labour force, with only 450,000 Kenyans saving through occupational schemes.

About 17 million Kenyans, mainly in the informal sector, are without insurance or pension solutions.

Saving rate in the country is at five per cent where less than 50 per cent of people in salary employment are saving for future retirement, RBA notes.

There is no coverage on pension for more than 17 million people in the informal sector which creates more than 80 per cent of new jobs.

“If we don't do something about this, can you imagine the crisis we will face in the next 15-20 years? When these 17 million people are no longer able to work because of old age, ill health or disability?," Raichura posed.

Zamara has embedded the scheme with a funeral cover, payable at 35 cents a day, with a final amount of Sh25,000.

This is payable to beneficiaries in case of death.

The launch of this platform comes at a time when Kenya’s pensions sector is facing a crisis of investor confidence after several companies defaulted on their repayment plans due to the pandemic.

With a population of about 47 million people (2019 Census), the country has 1, 287 registered retirement benefit schemes with about 1.7 million members.

The Fahari Retirement Plan is a fully digitised pension and savings solution which is also accessible  through USSD code, website and agents.

While backing the WhatsApp initiative, RBA chief executive  Nzomo Mutuku said more needs to be done to expand coverage, which will ensure financial independence in old age for more Kenyans.

“This innovation is a first in the country and we are optimistic it will spur voluntary individual savings including in the informal sector and the youth, majority of whom do not have a savings or retirement plan,” Mutuku said.