Those we spoke to say they are still yet to fill the dent incurred last year. 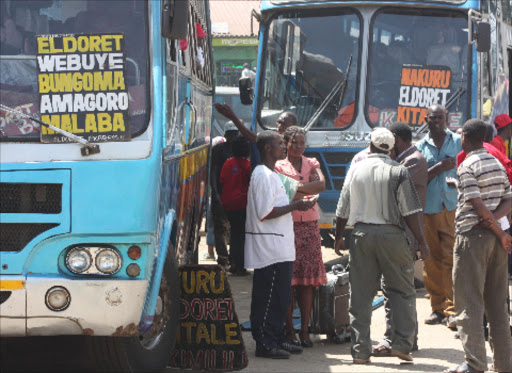 Almost a month since the lifting of the nationwide curfew which allowed night travel, long-distance bus companies are still struggling, inquiries by the Star indicate.

The day and night travel and the resumption of full capacity operation are yet to make a difference for operators who say they are still yet to fill the dent incurred last year when they faced high operating costs which came with the half-carrying capacity.

Operators were forced to ground most of their fleet with only a few buses making one-way trips during the day when the dusk to dawn curfew was in place.

During the period, the industry was recording monthly losses in excess of Sh15 billion according to the Matatu Owners Association chairman Simon Kimutai.

Companies such as Modern Coast were forced to suspend operations terming the business unsustainable. They have however resumed after President Uhuru Kenyatta lifted the curfew on October 20. (Mashujaa Day).

Easy Coach, which serves the wider Western, Nyanza and Rift Valley regions with a fleet of about 100 buses is among companies that have resumed full operations.

Managing Director Azym Dossa however says losses incurred during curfews, closures and lockdowns were huge and it will take time before the company breaks even.

“Even after the lifting, business is yet to be self-supporting. Mainly because the traveler is wary of spending....on non-essential? school fees, mid-term break. God willing we shall recover the losses,” Dossa told the Star in a telephone interview.

He has noted increased travel demand for December which could boost earnings for operators, with fares expected to shoot in the week to Christmas and New Year period.

“Demand for December is quite high, but we hope to send and receive empties in order to accommodate the passengers,” Dossa said, “ fares adjusted to sustain higher costs, fuel, allowances. Customer satisfaction is a priority..fares also important to our customers, but we cannot compromise on quality and ignore dignity for all.”

Mash East Africa, which has operations in Kenya, Uganda and Rwanda, with a fleet of more than 60 bus has also resumed full operations after grounding 43 buses since March last year when the night curfew was put in place (one and a half year).

It had been operating 17 buses carrying half-capacity under the then social distancing rule.

While it has resumed both day and night travel, the company is still struggling to clear pending bills and salaries, amid operating expenses that have come with bringing back the entire fleet, general manager Lennox Shalo says.

“We are struggling, I believe no transporter can say they have broken even. It will take some time for business to go back to the Pre-Covid era,” Shalo said.

He however expected December to be busy as families travel upcountry for the Christmas-New Year festivities.

“The numbers are not big at the moment but inquiries for December have started to stream in. We are hopeful things will be better,” said Shalo.

MOA chair Kimutai said: “Kenyans generally have been devastated by Covid and their pockets are empty which restricts traveling. Business is down despite the lifting of curfew and allowing full capacity.”

According to Kimutai, SMEs depleted their working capital in Covid times and they are the main users of PSVs.

“December holidays have not commenced, hoping that people will have money in their pockets to travel,” he said.