Move expected to cut the cost of cooking gas in the country.

•Gas to be imported under the Open Tender System similar to the one currently used to import petroleum products.

•Gas prices have been rising in recent months, pushing households back to alternative sources of fuel such as firewood and charcoal for cooking. 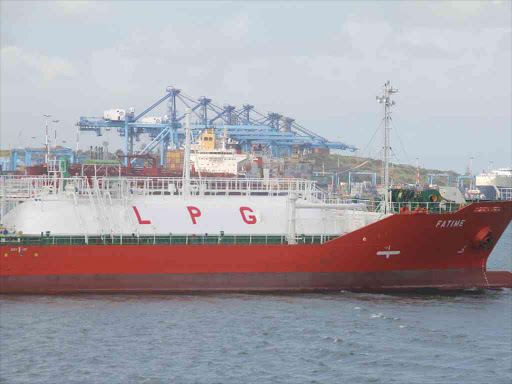 An LPG vessel at the Port of Mombasa /FILE

Cooking gas prices could drop by more than 30 per cent if Kenya Pipeline Company goes ahead to handle Liquefied Petroleum Gas with investment in bulk storage and supply.

This, as it angles itself to take over operations at the new Kipevu Oil Terminal and the acquisition of the Kenya Petroleum Refineries Limited (KPRL) Changamwe facility, plans that are underway.

The state corporation is currently in talks with the Energy Ministry and industry players on the process as plans to become the major handler.

According to management, the country's lead oil products pipeline transporter is keen to put up a dedicated LPG storage facility with an initial capacity of 25,000 tonnes, with future expansion.

The tender for the construction of the facility should be ready in the next two to three months, according to general manager infrastructure development, David Muriuki.

The facility is expected to be up and running within the next three years.

One of the measures that will see a reduction in the cost of gas is the Open Tender System, similar to the one currently used to import petroleum products.

Under the system, Oil Marketers Companies (OMCs) bid to import petroleum products that Kenya will use for a period of one month. The winning bidder then sells the petroleum to other market players at the same price after taxes and other costs have been factored in.

Companies can either bid alone or under a consortium.

The Energy and Petroleum Regulatory Authority (Epra) will then set the monthly prices as it does with oil products, which is reached after incinerating global prices, freight charges, OMCs margin and taxes.

Unlike petroleum, the LPG market has remained liberal with individual players such as Africa Gas and Oil Ltd (AGOL) dominating the market whose prices are not regulated.

KPC is banking on the new Sh40 billion Kipevu Oil Terminal to improve LPG cargo handling, with the facility also expected to help reduce the cost of other fuel products.

Demurrage charges are likely to drop as the new facility will be able to berth four vessels (three petroleum and one LPG) at once, hence save on the vessel queuing time.

Demurrage is a charge payable to the owner of a chartered ship on failure to load or discharge the ship within the agreed time.

“The new KOT will have a dedicated line for LPG. We expect consumers to enjoy economies of scale,” Muriuki said.

Gas prices have been rising in recent months, pushing households back to alternative sources of fuel such as firewood and charcoal for cooking, against the country's ambitious plans of moving to clean energy.

"Prices range from brand to brand. Pro Gas for instance has the highest price right now, " Enock Mwangi, a dealer in Nairobi told The Star.

Gas prices shot by up to 31.8 per cent in July this year as the government introduced a 16 per cent VAT on Liquefied Petroleum Gas.

Excise duty on imported LPG cylinders also went from zero to 35 per cent.

According to the Petroleum Institute of East Africa (PIEA), this has made it expensive for first-time consumers of LPG to invest in gas cylinders.

There is also a threat of rising illegal cooking gas refilling business in the country experts have warned.

PIEA notes that making cooking gas expensive would negatively affect the economy, environment and health, as more Kenyans are being pushed back to dirty fuels.

While Kenya's LPG growth action has been targeting to increase cylinders to 18 million by 2030, from the current 4.5 million, this will not be met if the cost of LPG is distorted, PIEA General Manager Wanjiku Manyara notes.

Many Kenyans are being forced to fall back to other sources of energy, it says.

“More than 8,649 children will continue to die annually of preventable pneumonia because of inhaling toxins from smoke as their mothers cook with charcoal and firewood. These children will get sick and die before they celebrate their fifth birthday,” Manyara said.

President Uhuru Kenyatta's pledge to the World (on April 21, 2021) that Kenya was on course in converting 100 per cent Kenyans using firewood, charcoal and kerosene to LPG by 2028 will be "a pipe dream" as it will be completely derailed, PIEA notes.

The Consumers Federation of Kenya (COFEK) has on several occasions faulted Parliament for raising the cost of living by escalating the tax on cooking gas, fuel and other essential foodstuffs.

A recent study published by the Ministry of Energy ( 2019) shows that 93.2 per cent of the rural population still rely on solid fuels as their primary fuel source.

The Economic Survey indicates that indoor air pollution from cooking fuels like charcoal and firewood is killing an estimated 21,600 Kenyans annually, with 40 per cent being young children and infants.