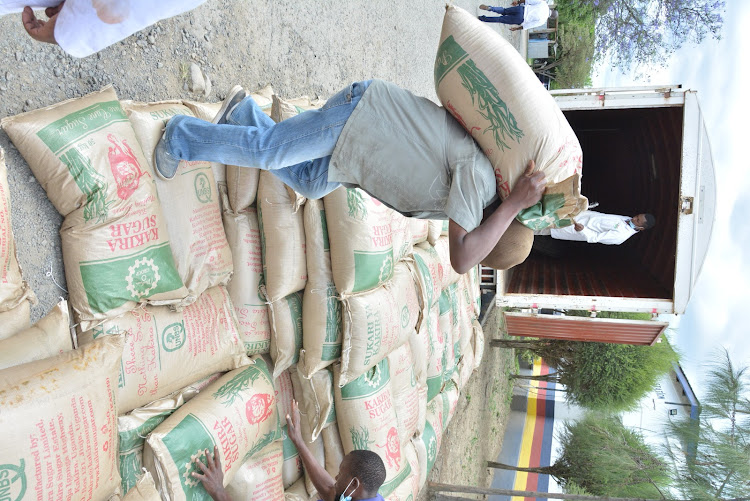 Sugar Workers offload part of the 500 bags of sugar that has been stolen by highway robbers along the Naivasha-Mai Mahiu road. Police recovered the sugar that was destined for the port of Mombasa from Uganda in Kinale area following a tip-off from members of the public.
Image: George Murage

Families in Kenya are paying dearly for the government's decision to cut sugar imports from Uganda, with the commodity prices now up 30 per cent.

A spot check by the Star in various supermarkets in Nairobi showed a 2-kilogramme packet of several sugar brands retailing between Sh285-298.  In September, the same quantity was retailing at Sh230.

In September, Sugar Directorate in Nairobi said that traders will only be allowed to import 18,923 tonnes of sugar from Uganda, down from 90,000 tonnes that Kenya had earlier said would be shipped in from its landlocked neighbour.

This was a direct contradiction of an agreement between the two countries in April where Kenya agreed to allow 90,000 tonnes of sugar from her landlocked neighbour as soon as the verification mission on the country of origin was completed.

The Kenyan delegation led by Trade CS Betty Maina extensively discussed non-tariff barriers with their host, seeking assurance that the sugar exported to Kenya was wholly produced in Uganda.

Uganda on its part committed to abolishing a 13 per cent excise duty on Kenyan-manufactured juices, malted beers, and spirits with effect from July 1 and scrapping a 12 per cent verification fee on pharmaceuticals manufactured in Kenya.

Additionally, Uganda undertook to abolish the 18 percent VAT charged on processed poultry meat exported from Kenya and zero-rate drugs manufactured in Kenya with effect from July 1.

Despite these pledges, both countries continue to feud, triggering intermittent disputes such as the latest one on the sugar trade that saw Uganda protest on Twitter.

In a Twitter thread, the country's Minister for Agriculture Frank Tumwebazesaid Uganda was not happy with the restrictions.

''We need an honest conversation about these trade restrictions''.

The perennial sugar war between the two countries saw Kenya delay a deal where it had allowed Uganda to export surplus sugar into the country three years ago.

Nairobi delayed the implementation until late last year when the neighbouring state was allowed to ship in 20,000 tonnes of the 90,000 tonnes surplus that it had requested.

Data shows Uganda produces about 510,000 tonnes of sugar annually, of which about 360,000 are consumed locally and the rest offered to the regional export market.

Kenya produces 600,000 tonnes of sugar annually and it relies on imports to meet the growing demand that currently stands at 900,000.

The country is allowed to bring in 300,000 tonnes of duty-free sugar every year from Comesa states.

Apart from cutting Uganda imports, the Kenyan government has increased sugar cane prices by at least Sh200 per tonne, with factories likely to pass the extra bill to consumers.

This is the second time that the government has reviewed the price of sugarcane, coming as a boost to farmers.

The Crops (Sugar) (General) Regulations, 2020 provide for a Sugarcane Pricing Committee responsible for developing the pricing formula and reviewing prices, which is based on the cost of the commodity on the shelves.

Occasional machinery breakdown at most local sugar firms is also going to add to the pain of high prices, with at least four firms grinding at the lowest capacities.

The rising cost of sugar and other commodities will have a negative impact on inflation as the food basket is a major driver of the cost of living.

Inflation in October dropped to 6.4 per cent from 6.91 per cent a month earlier in what Kenya National Bureau of Statistics attributed to low food prices.