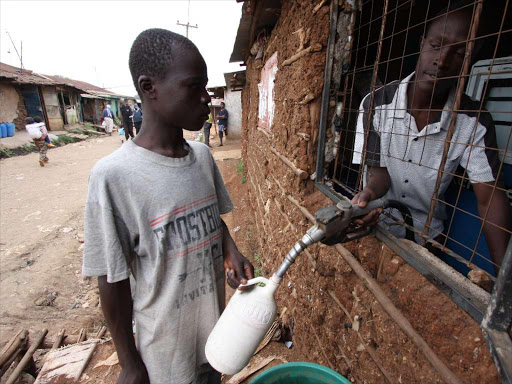 A kerosene pump shop at the Kibera slums, Oil marketers are pushing for higher tax on kerosene.Photo Jack owuor

Oil marketers are concerned over delayed reimbursement by the government under the ongoing subsidy plan that cushions consumers from high fuel prices.

An official of the oil marketer’s body who is also a manager at a leading oil firm told the Star that the state is holding over Sh15 billion and has only paid paid five months due of compensation since July last year.

The Supplycor official who sought anonymity so as not to be marked by those handling the subsidy said members are angered by the delays and are reconsidering the deal.

“We are looking at a number of options to push the government to pay our dues. We are in the business of margins, a slight mistake is enough to send us out of business,’’ he said.

He added that they might be forced to holding stock if the situation does not improve.

‘There is no need to sell at a loss. The government must either pay us or reinstate our margins,’’ he said.

Supplycor members account for over 80 per cent of fuel retailed in the country.

Yesterday, the Energy and Petroleum Regulatory Authority distanced itself from the matter, saying its functions are limited to implementation.

The National Treasury spokesperson, Paul Oyier promised to get back when contacted but had not done so by press time.

The subsidy scheme is supported by billions of shillings raised from fuel consumers through the Petroleum Development Levy, which was increased to Sh5.40 a litre in July last year from Sh0.40, representing a 1,250 per cent rise.

Last month, the national assembly’s Finance and Planning Committee was told how the exchequer diverted Sh18.1 billion meant for fuel subsidy to a Chinese firm operating the Standard Gauge Railway (SGR), leading to the withdrawal of the subsidy plan.

This saw fuel prices rise to a historic high, with the cost of a litre of Super Petrol going up by Sh7.10, diesel Sh9.90 and kerosene at Sh11.36.

National Treasury PS Julius Muia told the committee that Sh8.6 billion was used for fuel subsidy up to July 2021, before the remaining cash was put into other use.

"By August, only Sh3.8 billion of the funds was remaining but was diverted to upgrade infrastructure in the energy sector,''Muia said.

The public outcry that followed high fuel prices saw the government reinstate the subsidy plan that saw a litre of Super Petrol ease to retail at Sh. 129.72, diesel at Sh.110.60, and kerosene at Sh. 103.54 in Nairobi in October.

On Sunday, EPRA retained prices for another month to December 14 despite a huge increase in landed cost on high global prices.

Had the State failed to stabilise the prices, Super petrol would have retailed at a record high of Sh143.48 per litre in Nairobi, according to tabulations by EPRA.

Diesel, used by industries and the transport sector, would have hit Sh126.28 per litre in the capital over the November-December pricing cycle.  Kerosene, largely for lighting and cooking in poor households would have reached Sh115.11 per litre.

The costs of energy and transport have a significant weighting in the basket of goods and services that is used to measure inflation in the country.

Producers of services such as electricity and manufactured goods are also expected to factor in the higher cost of petroleum.