•He said the impact of climate change has also been affecting the sector. 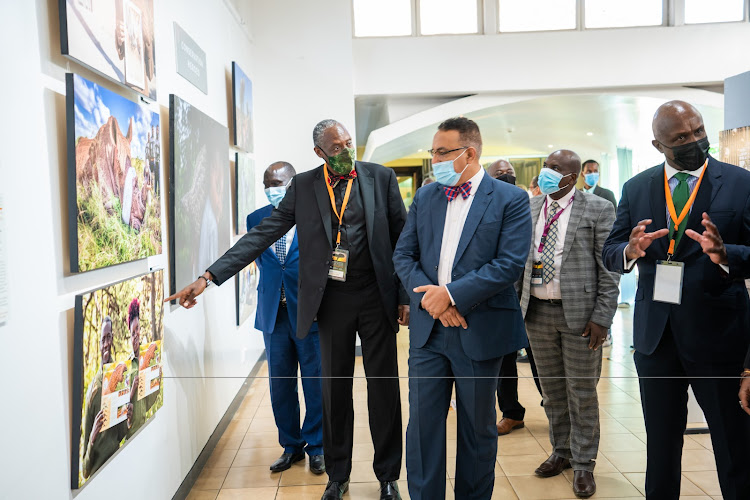 Safari, a common term used on visiting parks, is one one of the leading tourist activities Kenya.

However, challenges facing wildlife in the country are increasing every day, the government admits.

The CS notes the impact of climate change has also been affecting the sector.

“We have no choice, climate change is serious, if we are not careful, we will lose what we have,” Balala says.

The CS said there is a need for developing guidelines for the mitigation measures of climate change.

The CS spoke at a recent event at the National Museums of Kenya when he presided over the African Wildlife Foundation’s 60th year anniversary of conservation.

The anniversary coincided with the awards ceremony for the winners of the inaugural Benjamin Mkapa African Wildlife Photography Awards, named in honour of the late former Tanzanian President.

Sixteen winning photographers from across the world attended the ceremony at the Nairobi National Museum.

They received honorary certificates and awards for their photographs and videos in the global competition that received almost 9, 000 entries from 50 countries worldwide, including 10 countries here in Africa.

The Grand Prize winner, Riccardo Marchegiani, from Italy received a cash prize of US$5,000 (Sh 555,476) and a large Shona elephant sculpture for his photo “Gelada and Baby” shot in the Simien Mountains National Park, Ethiopia.

In addition, Marchegiani will be featured with an interview and portfolio in Nature’s Best Photography magazine, as well as a feature in a special edition devoted to the Benjamin Mkapa African Wildlife Photography Awards.

The CS said the demand for agricultural land was also competing with conservation.

Balala said there is a need to balance the issues that are serious by involving the stakeholders because a huge amount of money is needed to transit into the 30 per cent mark.

The CS described the late Mkapa as a legend of conservation.

He said the future of the world will be the capital assets that are nature-based and which is abundant in Africa.

“We will use our assets to negotiate in the future,” said Balala.

According to the minister, Kenya has put in place measures to address challenges being brought about by the impact of climate change adding that the country is a renewable energy powerhouse.

“We have looked at our wildlife as something to be visited by others,” she said.

“When we lose that, then we have nothing to talk about because we are a nature-based economy similar to other African Countries,” she said.

Githaiga said most Kenyans do not get an opportunity to visit the national parks adding that the photos captured will help enlighten them to do so.

“Our hope is that our wildlife will not remain in photographs because numbers are declining,” she said.

According to Githaiga, the photographs will be at the national museums up to January 15 next year in order to give an opportunity to people across the divide to see.

“We are very keen on having young people come and see these photographs as they will live with the consequences of our actions longer than us. So they need to see the beauty that is in this country,” she added.

Githaiga said the photographs will also be shown in countries such as the UK and the US.

“The space is becoming smaller, wildlife numbers go be increasing or going down depending on which species we are talking about but the biggest challenge that we are currently talking about is habitat loss,” Githaiga said.

She called on authorities to ensure that land-use planning is adhered to.

“We need to move from planning into implementing the plans that are so many in this country.”

Closure of wildlife corridors has spiraled human-wildlife conflict, she notes, which often leads to retaliation.

However, there is a positive bend for the populations of elephants and rhinos.

“The question we should be asking ourselves is the numbers are increasing and what about the habitat?” she poses.