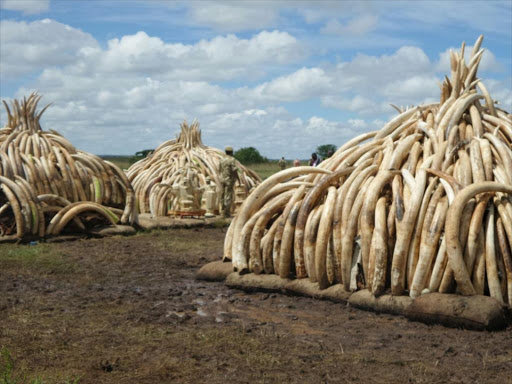 Piles of Ivory before they were burnt in efforts to curb poaching. A driver was charged in Kibera with being in possession of stockpiles worth Sh800,000. Photo/Patrick Vidija

Kenya remains a leading spot for laundering proceeds of illegal wildlife trafficking, logging, and fishing in Africa, a report on illicit financial flow by Sentry shows.

Dubbed 'Kenya Illicit Finance Risk and Assessment', the report says the country acts as a transshipment site for East Africa.

According to the report, Tanzania, Mozambique, Uganda, DRC, Zambia and South Sudan traffic their wildlife products via Kenya heading to Asian countries including China and Hong Kong via Malaysia, Vietnam, Thailand, and Singapore.

The Sentry is an investigative and policy team that follows the dirty money connected to African war criminals and transnational war profiteers and seeks to shut those benefiting from violence out of the international financial system.

It added that environmental crimes threaten the natural ecosystem, food systems, and income sources for Kenyans and are often linked to corrupt public officials and organised crime networks and cartels.

It further indicates that between 2011 and 2016, authorities seized over 20,000 kilogrammes of ivory in Mombasa with over 26,000 kilogrammes seized elsewhere having gone through the Port of Mombasa.

This is equivalent to ivory sourced from almost 7,000 elephants.

The UN estimates that global illicit transactions could total $570 million for ivory and $390 million for rhino horn annually.

With regard to illegal logging, the report says Kenya loses 70,000 hectares of forest each year.

In particular, sandalwood, a highly profitable endangered species, is trafficked to Uganda and back to Kenya before being shipped overseas. The illicit wood trade has been linked to cartels and corrupt public officials.

Furthermore, it is estimated that Kenya loses Sh10 billion ($90 million) to illegal fishing every year.

Sentry cites a recent report by Global Financial Integrity and Transparency International which illustrated how complex corporate structures were used to hide the identity of the beneficial owners of a ship fishing in Kenyan waters without a license.

The report is coming on the back of the UNCTAD report titled Economic Development in Africa Report 2020 that ranked Kenya at position 24 globally among countries with high illicit financial flows.

It is estimated that the country losses at least Sh40 billion via illicit financial flow and aids transfer of more than Sh300 billion 'dirty money every year.

Post a comment
WATCH: The latest videos from the Star
by VICTOR AMADALA Business Writer
Kenya
03 November 2021 - 17:00
Read The E-Paper