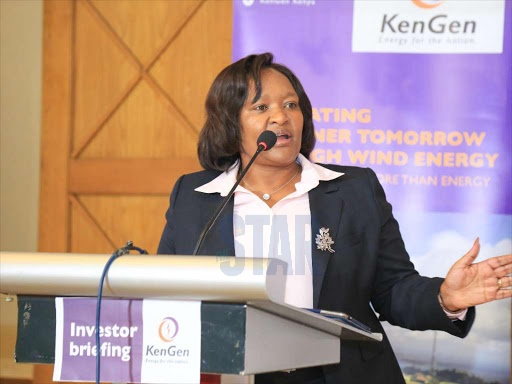 According to the listed generator's audited results released over the weekend, net earnings dropped to Sh1.18 billion compared to Sh18.37 billion in 2020.

The corporate tax rate was reduced from 30 per cent to 25 per cent but reserved back to 30 per cent during the period under review which resulted in a tax expense of Sh8.79 billion on deferred tax compared with a credit of Sh8.14 billion in the previous year.

''This contributed significantly to the high tax expense of Sh13.57 billion compared to the previous tax credit of Sh4.59 billion,'' KenGen said.

Even so, its gross earnings grew seven per cent from Sh13.79 billion to Sh14.76 billion.

The NSE-listed power generator has recommended a dividend pay-out Sh0.30 per share which amounts to Sh1.98 billion to be paid to all its shareholders.

KenGen managing director, Rebecca Miano said the profit growth was achieved on the back of continued revenue growth underpinned by the company’s diversification strategy.

“In spite of the challenging times, KenGen remained strong recording a steady performance and demonstrating sound financial position which reaffirms the company’s promise and commitment to continual business growth and maximization of shareholder value,'' Miano said.

This was mainly attributed to revenues from geothermal, hydro generation and the diversification venture at Tulu Moye in Ethiopia.

The firm benefited from a full year operation of the 172MW Olkaria V geothermal power plant whose construction was completed in October 2019, resulting in a 12 per cent displacement of thermal generation.

In line with KenGen’s affordability agenda to lower the cost of electricity to the consumers, we prudently prioritized dispatch of competitively priced hydro generation,”  Miano said.

In the year ahead, KenGen aims to deliver Olkaria I Unit 6 geothermal power plant, which will add 83MW to the national grid by end of December 2021.

At the same time, the company aims to progress the milestones towards the commencement of the 140MW Olkaria VI geothermal power plant through a Public-Private Partnership (PPP).