Traditionally, this has been a period of high spending with sex workers making a kill. 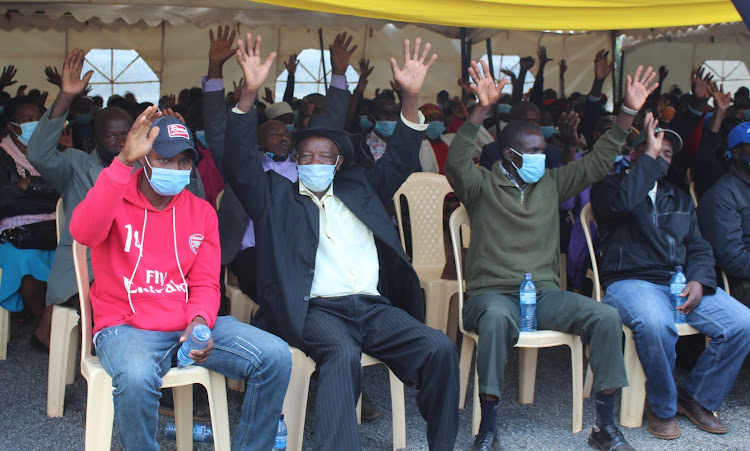 Iria-ini Tea Factory farmers during a meeting with Agriculture CS Peter Munya when he visited factories in Nyeri to update farmers on the progress of the implementation of reforms in the tea sector/
Image: EUTYCAS MUCHIRI

Women shopping for households and men changing their wardrobes is a common scene.

The climax is however the thronging of bars and night clubs by tea farmers with sex workers migrating from as far as Mombasa to these towns, as they anticipate to make a kill from willing buyers.

Bomet and and Kericho are such towns that have for years witnessed an influx of sex workers when annual tea bonuses were paid.

However, things may not be the same this year as bonuses remain low for the third year running.

According to a survey by global research firm–GeoPoll, approximately three out of four Kenyans have cut down on non-essential spending.

This is occasioned by reduced earnings where 70 per cent of those surveyed reported decreased incomes.

Things are likely to be similar with tea farmers this year as they move to save and spend more on what is necessary, with school fees being a priority.

Farmers can expect the funds to reflect in their bank accounts by the end of this week, the agency said.

The second payment, popularly known as bonus, has been released following the conclusion of meetings by factory directors from the 54 KTDA-managed factories that were held between September 20, and October 1, to review the audited 12-month accounts of their factories and declare the second payment rate.

In 2019, a the final payment to farmers was Sh28.8 billion, meaning bonuses have remained low for the third year running.

This comes a mid low tea prices at the auction amid high production and increased competition from other global exporters.

While it remained above the two dollar mark for the fifth consecutive week, the commodity's prices have averaged $1.7 (Sh188.84) for the better part of this year, something likely to hurt next year's bonuses.

This has also reflected in this year's bonuses, for the financial year ended June 30.

The strong US dollar which was yesterday exchanging at 111.08 to the Kenyan shilling is however expected to cushion farmers from a major drop in earnings.

He said the Board and Management are working in ensuring that farmers get optimal benefit from the tea business.

Meanwhile, Sh600 per 50 kg bag of fertilizer will be reflected in the payment in a bid to pass on the Sh1 billion fertilizer subsidy by the government directly to the farmers.

While lauding government efforts in driving reforms in the tea sector, Ichoho said KTDA will continue working with the state and other stakeholders in improving net earnings for the farmers.

He noted KTDA-managed factories are already enjoying higher tea prices at the auction following the introduction of the minimum reserve price. This is expected to translate to higher earnings next year.

The KTDA-managed factories are already enjoying higher tea prices at the auction following the introduction of the minimum reserve price. This is expected to translate to higher earnings next year.

During his Mashujaa Day cellebrations, President Uhuru Kenyatta noted that the tea sector has been the predatory grounds for cartels for decades, but it has now been liberated and its performance has started to improve.

It recently announced increased leaf pay-out for farmers in the Rift Valley and Western Kenya as reforms in the sector continue.

The increase approved by the KTDA board will benefit KTDA's regions five, six, and seven.

To mitigate against Kenya’s market concentration risk on black teas as well as over reliance on the four main markets of Pakistan, Egypt, UK and Sudan which account for 70 per cent of our tea exports, KTDA-managed factories have embarked on production of orthodox teas that are gaining global popularity and fetching better prices.

Agriculture CS Peter Munya has been keen to succeed in President Uhuru's reform agenda in the tea sector.

According to the CS, tea sub-sector plays a strategic role in the socio-economic development of the country by supporting over six million Kenyans directly and indirectly.