The global firm is keen on food availability, dietary diversity and market links.

•About 50,000 farmers have benefited from the initiate by Nestle which has partnered with Coffee Management Services (CMS).

•This is through training in an initiative dubbed “Farmer Family Nutrition Agripreneurship”. 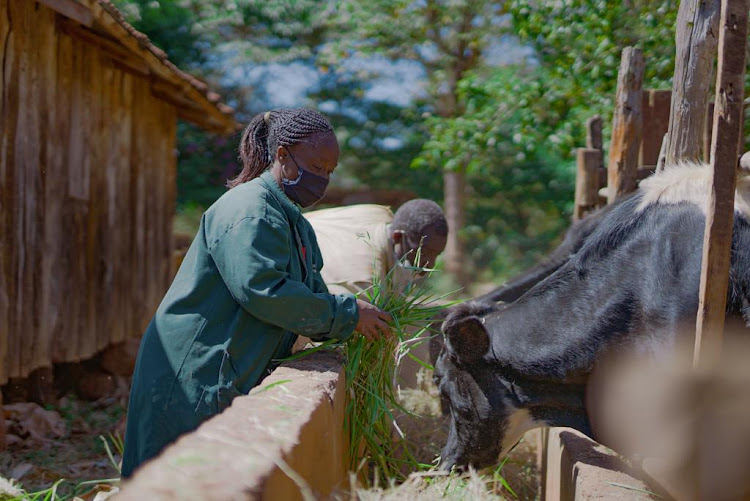 Lucy Wangari and husband Daniel Gichuki feed their dairy cattle. They are beneficiaries of the Farmer Family Nutrition Agripreneurship by Nestle/HANDOUT

Lucy Wangari and her husband Daniel Gichuki have for years depended on Coffee farming which has been their main source of income.

However, they are now starting to embrace other crops and farming activities including dairy.

The story is almost similar for Henry Waweru and his wife Ricanda Njeri who come from the same region.

They have diversified to other farming practices hence expanding their revenue sources.

The two families are beneficiaries of the 'Farmer Family Nutrition Agripreneurship training' by Nestlé, the world’s largest food and beverage company.

While coffee farming in Kenya goes way back to 1893 when it was first introduced in the country, it has in the past decade or two lost its glory with production declining while farmers struggle with low earnings and amid food insecurity.

Dwindling returns have seen owners sell off huge parcels of land with real estate projects coming up in these spaces.

The government and the private sector are however keen to revive and grow the giant industry, with a keen focus on ensuring farmers benefit more from the crop.

There is also a push for agripreneurship which simply means entrepreneurship in agriculture.

This helps farmers move from the overreliance on the cash crop and instead, go into other farming activities.

Nestle has embarked on an extensive programme that is designed to ensure farmers not only benefit from the crop but also diversify to other crops with the aim of ensuring food security and diversified incomes.

It is currently pushing for agripreneurship while supporting farmers in maintaining high coffee production and processing standards, to ensure Kenyan coffee remains a top brand in global markets.

A study revealed farmers are food insecure three months a year where coffee farmers are paid twice in a year.

According to Vincent Ogutu, an entrepreneurship consultant, a large number of farmers are more focused on cash crops forgetting to expand into other crops.

There is hence the need to expand to other crops to ensure food security and extra earnings from surplus.

“Intercropping is helping ensure food security where the farmers can consume the other crops grown apart from coffee, and sell the surplus. This ensures consistent cash flow,” Ogutu notes.

Some of the lucrative crops in the coffee-growing central region include avocadoes, bananas, and tree tomatoes.

About 50,000 farmers have benefited from an initiate by Nestle, which has partnered with Coffee Management Services (CMS) to work with coffee farmers in driving agripreneurship.

This is through training in an initiative dubbed “Farmer Family Nutrition Agripreneurship”.

Since the adoption of the program, coffee farmers have seen a 40 per cent to 59 per cent decrease in food inadequacies for three months or more, according to Nestle.

The direct result is that coffee farmers have significantly increased their family food and nutrition security, paving the way towards a safer and healthier future for generations to come, the global firm notes.

“At Nestlé, doing good for us is about creating shared value, which is a core pillar of our brand. We adopt initiatives that will contribute economic value to the shareholders, the community, and eventually to the consumers,” said,” said Ng’entu Njeru, Nestlé East Africa managing director.

This is the third intervention under Nestlé’s Farmer Family Nutrition program that seeks to improve the livelihoods of coffee farmers in the Nescafé Plan communities.

In 2016, Nestlé made a public commitment to improve the nutrition status of farmers and their families, with a program that entails three interventions: food availability; dietary diversity and health; and market links.

The Farmer Family Nutrition program is part of the Nescafé plan, which was launched in Kenya in 2011, in partnership with Coffee Management Services (CMS).

The global firm has been investing on average $185,298 (Sh20.6million) annually and impacting over 50,000 coffee farmers and their communities in central and western Kenya.

Ambition of the Nescafé Plan, according to the company, is to make coffee farming a more attractive economic activity for present and future generations of farmers, in a sustainable way.

Meanwhile, the government is keen to revamp coffee farming in the country, with key reforms currently underway.

This includes the revitalization of New KPCU (Kenya Planters Cooperative Union) by the government, which has brought healthy competition into coffee milling activities.

As a result, farmers in high-yielding areas are now receiving upwards of Sh100 per kilogramme for their coffee, President Uhuru Kenyatta said during his Mashujaa Day celebrations, in Kirinyaga.

In March this year, Uhuru had issued two executive orders on reforms in the coffee and tea sub-sectors.

Executive order on the coffee sub-sector reforms was issued after recommendations of a presidential taskforce, amid the transmittal of the Coffee Bill, 2021 to Parliament.

“I am pleased to report that the determined efforts from my administration to root out corrupt co-operatives that have been predating on our coffee farmers have borne fruit,” the President said.