It has maintained the international standards for 15 years.

•KenGen was the first public institution to receive the ISO certification in Kenya back in 2004. 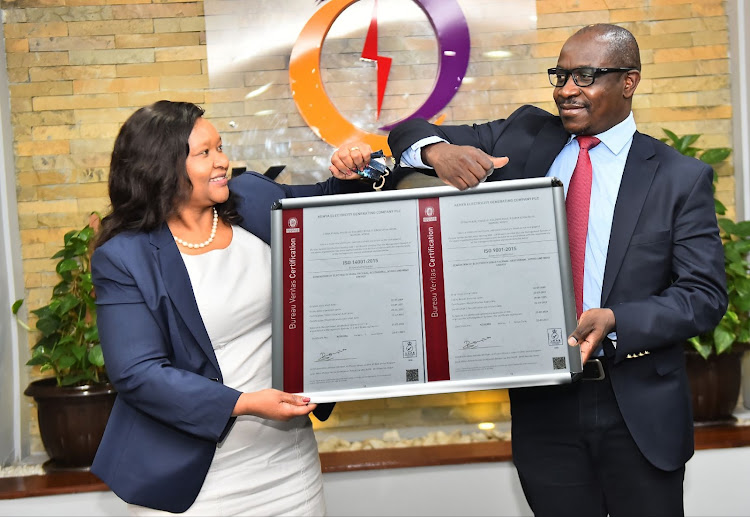 Kenya Generating Electricity Company (KenGen) has received its fifth ISO re-certification after successfully going through rigorous audits conducted by Bureau Veritas, to confirm the company’s conformity to the international standards.

KenGen Quality Management Systems (QMS) and Environmental Management Systems (EMS) were audited in June 2021 and found to be compliant with ISO 9001:2015 and 14001:2015 standards respectively, leading to the re-certification which was formally presented to the company this morning.

Speaking after receiving the certificate from the certifying body, CEO Rebecca Miano reiterated the company’s commitment to maintaining the standards through continual improvement.

Miano attributed growth of KenGen to good policies, strategies, and procedures adding that the company has an installed capacity of 1,818MW out of which, 86 per cent was being generated from green and renewable sources.

KenGen was the first public institution to receive the ISO certification in Kenya back in 2004.

It has maintained the focus and commitment to high standards leading to the fifth re-certification.

She said the implementation of ISO had helped improve the company’s efficiency and overall performance.

“This re-certification is a testament of our resilience and commitment to continually improve our processes to enhance better performance towards realization of our corporate strategy and goals,” she said.

Bureau Veritas District Executive Officer for East and Central Africa,  Cyprian Kabbis, said the audit process for recertification of KenGen was conducted smoothly and commended the KenGen team for their dedication and cooperation all through the process of audits and implementation of the procedures.