They have previously been regulated by the Commissioner of Cooperatives, whose requirements has been a little lax

• The non-deposit-taking Saccos are now expected to have structures in place that guide their operations. 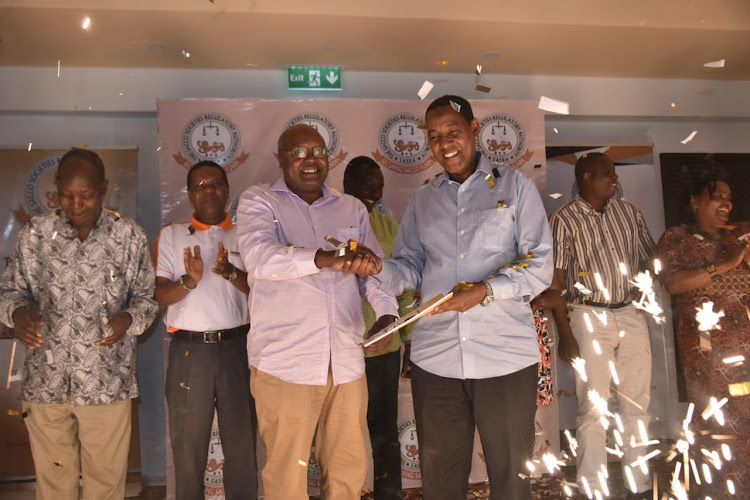 A village-based micro financial institution in Bomet has broken barriers and become a game-changer in the banking sector, providing solutions to agricultural farmers in the region.

Having been started 20 years ago by a group of 500 residents who had challenges in accessing banking services, Uswet Financial Services at Kapletundo in Sotik has now outgrown to be the most sought leading money lender in the region.

With a current membership of 13,000, the association with two branches now aims at strengthening its base to attain 30,000 members in the next one year.

“In our strategic plan we had anticipated to recruit 50, 000 members by 2022 but due to challenges posed by the outbreak of coronavirus which affected marketing we had to revise it to 30, 000 and that is our focus now,” said Kiptoo Tonui, the institution’s manager during an annual general meeting on Saturday.

The growth of the institution, according to Tonui, is mainly attributed to outreach programs and heightened trainings they have been conducting.

Tonui notes that for as low as Sh500 as initial membership fee and a Sh300 monthly savings, one qualifies for a loan facility but which depends on the number of shares which can enable them start a business or improve on the farming ventures.

“Locals here especially the old had challenges in accessing banks due to the distances and so they came together and thought of starting their own financial institution in the village…we started training them on the need to join and that is how we arrived here,” he said.

The official said the institution has also seen its savings increase from Sh2 million yearly to Sh20 million.

He further disclosed that there has been a gradual increase in the loan portfolio from Sh67 million in 2018 to Sh80 million this year which presents a rise of 20 percent.

Members, he added, enjoyed dividends of Sh20 down from Sh25 paid in the last financial year something he attributed to an increase in loan arrears occasioned by the outbreak of Coronavirus which greatly affected the existing businesses.

“We are scaling higher and we have advised our members that we need to diversify by venturing into other businesses as dairy and poultry farming, we do not depend only on one project,” he stated.

The manager at the same time pointed out that moving forward they intend to broaden their bases by moving out of the county and opening more branches so that they can increase their membership hence make the business sustainable.

Present during the AGM was chief administrative secretary John Mosonik who also used the opportunity to challenge the residents to join the financial institutions and take the credit facilities offered and utilize it properly.

Such informal micro finance entities are slowly coming to terms with the new tough rules  for non-withdrawable deposit-taking Saccos which came into effect on July 1.

According to the Sacco Societies Regulatory Authority (Sasra), the regulations are meant to tame rogue Saccos and secure millions of investors' funds.

The regulations could, however, result in the savers taking a cut on the dividends they take home every year as Saccos retain earnings to meet the new requirements.

The regulations require the non-deposit-taking Saccos to meet certain requirements that will enhance governance and in turn secure deposits.

The Sacco Societies Regulations of 2020 also require the cooperatives to increase their capital base, which could see the Saccos deny their members dividends and retain earnings to meet such requirements.

The regulations will bring Saccos with deposits of over Sh100 million under the oversight of Sacco Societies Regulatory Authority (Sasra).

They have previously been regulated by the Commissioner of Cooperatives, whose requirements has been a little lax.

Sasra has as of last year been regulating operations of 175 deposit-taking Saccos.

The new rules, which came into effect in January this year and gave players a six-month window to comply, place more demands on management of Saccos including minimum capital and liquidity requirements and file regular reports with Sasra on the state of the Sacco.

“We believe bringing these non-deposit-taking Saccos under the regulatory oversight of Sasra will improve stability and resilience of the sub-sector,” Sasra chairman John Munuve said.

The non-deposit-taking Saccos are now expected to have structures in place that guide their operations.

The Saccos, which are also referred to as Back Office Service Activity (Bosa), have had minimalist operations, at times owing to their size and scarce resources.

Many continue to operate as fairly small entities but some like Uswet Financial Services have over time grown and hence the need to increase oversight on them.

The Sacco agency  currently regulates 172 Deposit-Taking Saccos and 400 Non-Deposit Taking Saccos that meet the criteria set under the Regulations 2020.

In overall terms, the Authority puts the total number of Non-Deposit Taking Saccos in Kenya at 3,626, with a membership of over 1.5 million.

Total Assets are estimated at about Sh188.02 billion, with Total Deposits and Loans at Sh140.54 billion and Sh136.89, respectively.