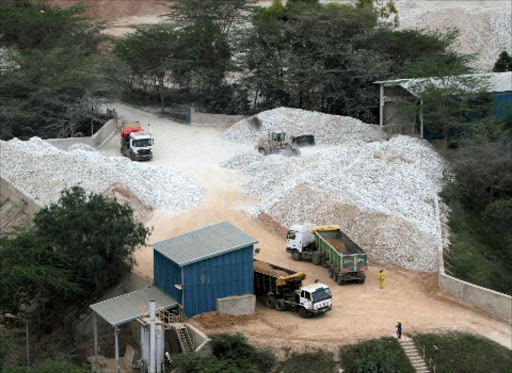 WE ARE CLEAN: A cement factory in Athi River
Image: REUTERS/Noor Khamis

A statement by the Kenya Association Manufacturers (KAM) comes a day after the Star reported that Devki Group was planning to send home 860 staff at its clinker plant due to low business blamed on high imports.

According to the lobby group, the four-year period will enable the non-integrated companies and those with ongoing expansions to set up their clinker facilities for self-sufficiency in terms of quantity and quality.

The  National Independent Verification Committee also want a national clinker standard to be developed by the Kenya Bureau of Standards (Kebs) to harmonise and enforce quality specifications.

''This should take cognisance of the requirements of special cement and white cement,'' the committee said.

To boost the Local Content Policy and the Big Four Agenda, stakeholders in the industry have been asked to develop a framework to boost cement production and consumption in the country.

The task force started its work on  April 22  and completed the verification task on  September 15 .

Among the findings is that the demand for cement has been growing, driven by growth in the housing segment and Government infrastructure projects.

The increase in clinker production mimics production capacity growth. The Committee also noted that 40 per cent of clinker is imported from around the world - 60 per cent of which, originates from Egypt at a Zero-Tariff Rate.

The team constituted representatives from the Ministry of Industrialization, Trade and Enterprises Development, Ministry of Petroleum and Mining, The National Treasury, Kebs and, a representative from the grinders, clinker manufacturers and KAM.

KAM's position and threats by Devki to to send home employees has however, angered a section of local cement manufacturers who accuse the National Cement of being disingenuous on an industry-wide issue that key stakeholders have engaged on.

“I do not see why National Cement is playing politics with such a sensitive long-term industry issue that has taken over a year and which involved the entire Cement industry,'' Benson Ndeta, Chairman, Savannah Cement said.

Bamburu Cement MD Seddiq Hassani said he is surprised on the statements being made by one of the players who participated in a detailed independent study for the industry.

“We are happy with the recommendations by the committee to give all players a stable and predictable policy framework for the next four years to be clinker sufficient which will be of great benefit to the country,'' Ndovu  Cement MD  Kishor Varsani said in a statement yesterday.