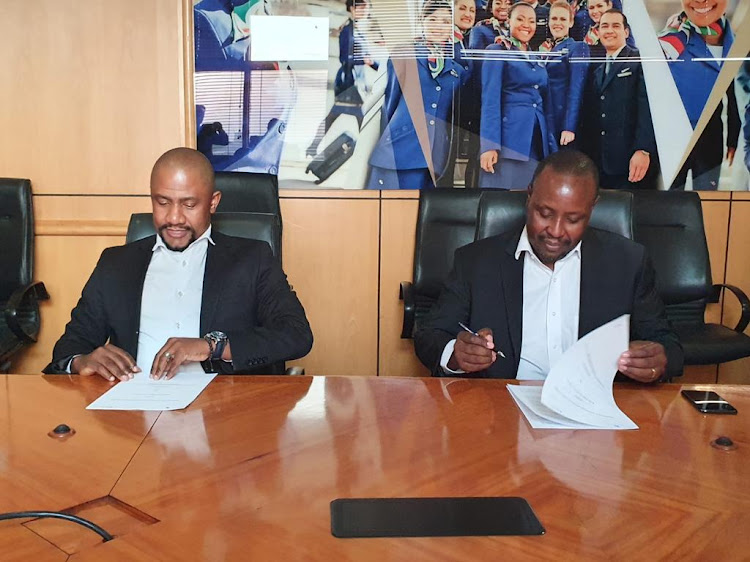 Kenya Airways (KQ) and South Africa Airways (SAA) are considering a Pan-African Airline Group to fight back foreign carriers dominance of intercontinental traffic in the region.

This is a revisit of a similar plan eight years ago that sought to bring together KQ, SAA and Ethiopian Airways during the 44th annual meeting of the African Airlines Association (AFRAA) in South Africa.

The memorandum between Kenya's national carrier and the South African counterpart touches on strategic positioning in global aviation, diversifying earning streams, and reinforcing regional partnership in Africa through diplomatic and commercial relations.

This is expected to spur an increase in passenger traffic, cargo opportunities, and general trade by taking advantage of strengths in South Africa, Kenya, and Africa.

KQ chief executive Allan Kilavuka said the future of aviation and its long-term sustenance is hinged on cooperation.

''This will enhance customer benefits by availing a larger combined passenger and cargo network, fostering the exchange of expertise, innovation and adopting home-grown solutions to technical and operational challenges,'' Kilavuka said.

He added that KQ which is in financial turmoil is committed to its turnaround strategy.

''The pursuit of partnerships is one of the core strategic pillars that shall transform the airline by ensuring its financial viability while offering world-class services in Africa and the world,'' Kilavuka said.

The airline posted an Sh11.5 billion loss for the half-year to June with turnover during the period dipping nine per cent to Sh27.3 billion compared to Sh30.2 billion same period last year.

This was mainly on reduced passenger numbers in the wake of the Covid-19 pandemic which continues to restrict global and domestic air travel.

SAA’s Interim CEO Thomas Kgokolo said this cooperation, which includes demand recovery and other cost containment strategies, will aid the recovery of both carriers in an increasingly competitive African airline environment.

The after-effects of Covid-19 on the aviation industry have seen airlines rethink strategy, with the African Airlines Association (AFRAA) calling on members to unite.

Other continents are already reaping dividends of consolidation.

Europe has for instance consolidated to three major airline groups – Lufthansa, Air France-KLM and British Airways/Iberia parent IAG – in a region of 27 countries.

In the United States, the United and Continental have come together along with Delta and Northwest. In Latin America, there have been mega-mergers in recent years with LAN and TAM and with Avianca and TACA.

According to AFRAA, Kenya's national carrier, Ethiopian, and SAA  currently offer about 650,000 weekly seats. This would make it roughly the 30th largest airline group in the world, slightly behind Avianca-TACA.

The latest report by the association shows that while the big three airlines are big in the context of the African market, globally they are small relative to giant competitors such as Emirates, Air France-KLM and British Airways.

Even if Kenya Airways, Ethiopian and SAA were to combine, they would account for just 37 per cent of Emirates’ revenue and about half the number of passengers.

One of the biggest challenges facing the industry is the lack of open skies.

Each African state negotiates its own bilateral agreements which have led to a highly restricted intra-Africa airspace but competing foreign airlines offering inbound tourism and trade connections being granted significant capacity rights.

''African airlines have the capacity but are not able to deploy it to access most of the continental market. Intra-Africa air travel accounts for just 26 per cent of total air passengers while regional trade is only 10 per cent,'' AFRAA's report reads in part.