Cargo movement from Mai Mahiu–Malaba to start in November

•Countries set to benefit include Uganda and Congo

•Others are Rwanda and Southern Sudan 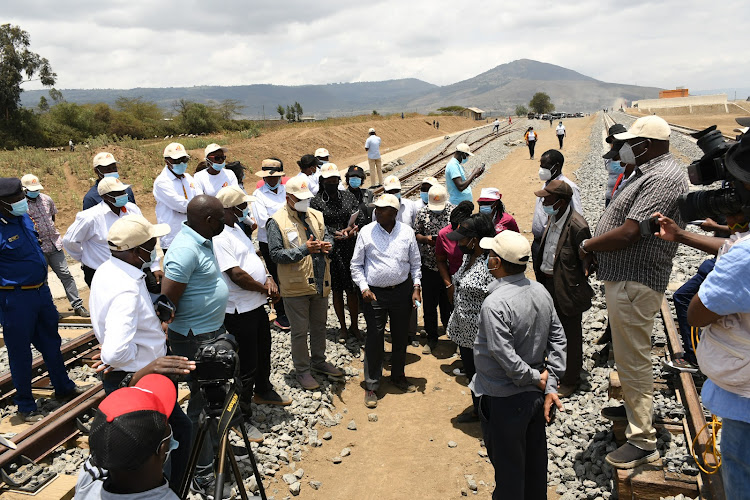 Railway line Members of the parliamentary committee on finance and planning join the management of Kenya Railways on 24/9/21 in touring the extension of the 24km meter-gauge railway (MGR) line from Mai Mahiu Inland Depot Container (ICD) to Longonot town in Naivasha which is now complete.
Image: George Murage

Evacuation of cargo from the Inland Container Depot (ICD) at Mai Mahiu-Naivasha, to Malaba will start in November.

This follows the completion of the 24km Meter-Gauge Railway (MGR) line from the ICD to Longonot town in Naivasha.

The parliamentary committee on finance and planning visited the ICD and the meter-gauge railway line on Friday, after concerns over the viability and profitability of the project.

According to Kenya Railways MD Phillip Mainga, the Sh3.5 billion extension will connect the Standard Gauge Railway (SGR) with the MGR.

Maingi said this will hasten the process of ferrying goods from Mombasa to neighboring countries, as railway remains faster than road by over 10 days.

“The extension of the 24km meter-gauge railway is now complete and once we are through with the trials we shall commission the line in November,” he said.

Addressing the press after touring the line and the ICD on Friday, Mainga noted that previously, there were connectivity challenges in evacuating goods to the neighboring countries.

He noted that between 2017 to date, the government agency has ferried over four million tonnes of cargo, which is expected to rise in the coming days.

“Thirty per cent of cargo on our roads is destined for regional countries and with the connectivity complete, we expect to use the railway line to ferry these cargo,” he said.

Wajir South MP Mohamud Sheikh Mohammed,who is a member of the committee, said that they were keen to investigate if the SGR was cost effective.

He noted that there were concerns over the profitability of the railway adding that they would seek to know the full cost, transparency and effectiveness of the new railway line.

“Kenya is now an economic hub for the region and the rehabilitation of the railway line is an investment for the future,” he said.

Kisumu Town East Mp Shakeel Shabir defended the government over the cost used in constructing the SGR, that totals to Sh327 billion.

He said that globally, railway lines were not supposed to make profit but spur the economy and development of a country.

“Once the rehabilitation of the railway line is complete, it will open up trade between the Western region and neighboring countries of Uganda and Tanzania,” said Shabir.