It will guide regulatory agencies on coordinated border operations.

•This comes 10 months after the commissioning of the facilities, on December 9 2020.

•The OSBPs are key in easing cross-border movement and facilitating trade. 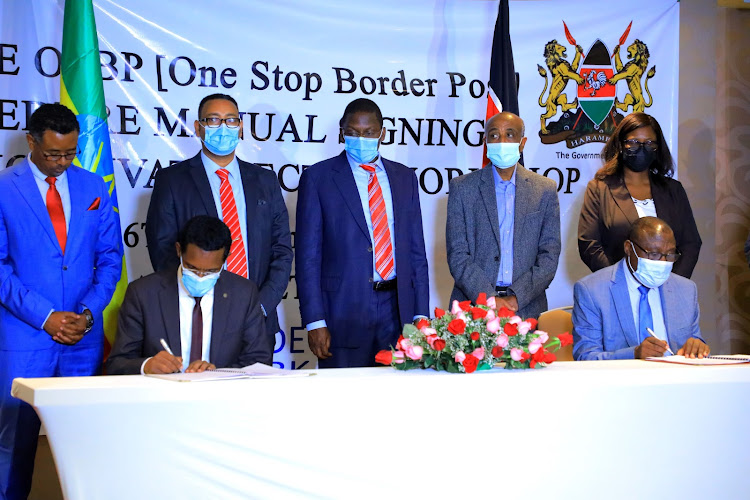 Kenya and Ethiopia have signed an operations manual for the Moyale One Stop Border Post aimed at boosting trade and movement between the two countries.

This comes 10 months after the commissioning of the facility, on December 9 2020, by the Presidents of the two countries and the subsequent commencement of One Stop Border Post (OSBP) operations, on  June 8, 2021.

This is expected to improve border crossing by making border clearance processes easier, faster and cheaper for traders, transporters and travellers, without compromise to the regulatory requirements.

The two governments also held a consultative workshop at Moyale OSBP, with representatives from various public and private sector organisations from  Ethiopia and Kenya and discussed the opportunities available for traders using the OSBP.

Kenya’s head of delegation and the secretary of Kenya’s Border Management Secretariat, Kennedy Nyaiyo, said the country is committed in promoting trade between the two nations.

“The signing of the procedure manual will guarantee that all processes have been reviewed and harmonised. This will ensure that trading and cooperation between Kenya and Ethiopia  is efficient and effectively facilitated,” Nyaiyo said.

Commissioner of the Ethiopian Customs Commission, Debele Kabeta said that though the two countries enjoy long ties, trade connectivity has been “quite insignificant” compared to the potential.

“Currently, the situation is changing and the volume and diversity of goods traded between Ethiopia and Kenya is growing at a higher rate," said Kabeta.

He said the Moyale One Stop Border Post will be boost trade relations and free movement of people between the two countries.

The post is expected to improve trade volumes, increase efficiency in doing business, foster community cohesion and development, and strengthen relationships between Kenya and Ethiopia.

These, among other border regulatory agencies are supported by TradeMark East Africa, with funding by the United Kingdom.

The construction component of Moyale OSBP was funded by  the African Development Bank (AfDB), and the governments of Ethiopia and Kenya.