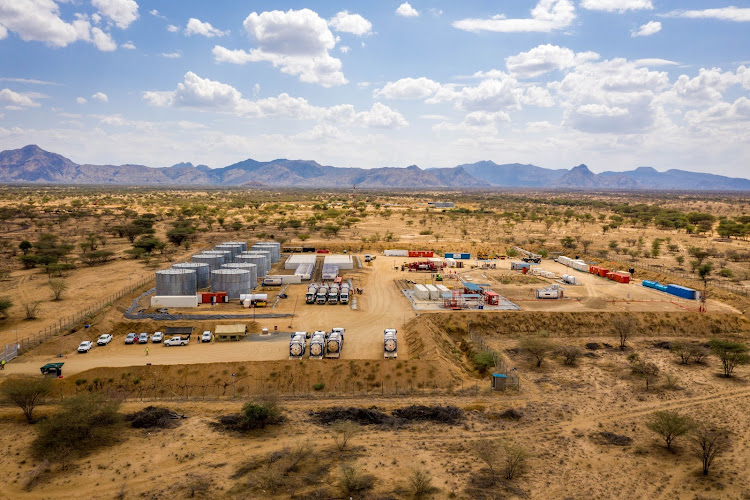 An aerial view of one of the Turkana oil project
Image: HANDOUT

A development update report seen by the Star indicates Africa Oil and its Joint Venture Partners plan to submit a finalised FDP by year end in line with license extension requirements provided by the Kenyan government last December.

''Based on the revised plan, Africa Oil believes that this project is an attractive commercial prospect for investors looking to access the East Africa oil and gas sector in both the upstream and midstream,'' the oil firm said in a statement.

A series of local, regional, and global occurrences have in recent times weakened the economic viability of the Turkana oil project, a move that saw  predictions of Tullow Oil's exit by December when its agreement extension with Kenya expires.

Uganda's President Yoweri Museveni's visit to Tanzania in May where he and President Samia Suluhu witnessed the signing of the crude oil pipeline deal seemed to dim Kenya's hope to join the oil producing league.

In 2015, Uganda abandoned the proposed Uganda-Kenya crude oil export pipeline joint venture that was to run from Lake Albert, through Turkana to a new Lamu port, and instead pump their oil via Tanzania.

Last year, the country was presented with two designs for the Lokichar-Lamu crude oil pipeline with a price variation of $122.2 million (Sh12.9 billion).

This was after British firm Wood Group completed the front-end engineering design that shows Kenya can opt for a pipeline with onshore storage facilities that would cost $1.2 billion to construct or one with floating storage facilities at a cost of $1.1 billion.

Without Uganda oil, the planned Lamu pipeline would end up with higher unit capital and operating costs, hence putting the Turkana oil plan in limbo,'' George Wachira, a director at Petroleum Focus Consultants said in April.

On Wednesday, Tullow said JV Partners continue to work collaboratively with Kenya on land and water access and on the necessary commercial agreement and are waiting on the final approval of the Environmental and Social Impact Assessment from the regulatory authorities.

"Together with our JV partners, we have made significant progress in redesigning and optimising Project Oil Kenya. Compared to the previous field development plan, we have a more economically robust project, which I am confident is more attractive to potential new partners,'' Africa Oil CEO Keith Hill said.

He added that they are actively seeking strategic partners for the project.

This capex estimate is based on bids and the Front End Engineering and Design updates from contractors.

Capex to First Oil has increased from the previous project design, reflecting the increase in resources and the associated increase in wells and infrastructure to achieve this.

Over the life of the field, the revised project has reduced the overall unit cost to $22/bbl (previously $31/bbl).

''The combination of the above leads to an optimal project that delivers more economic barrels within the license period,'' Hill said.

He added that this leads to greater flexibility to incrementally add additional fields into production without significant infrastructure modifications.