•However, effective electricity generation capacity dropped by 1.1 per cent to 2,705.3 MW.

•Sales to large and medium commercial category declined by 3.6 per cent to 4,281.0 GWh in the review period. 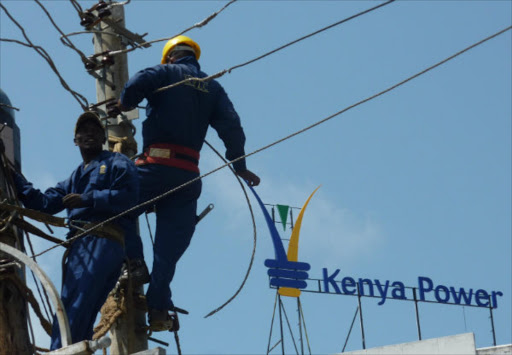 Technicians working on a power line/FILE

The country's installed electricity capacity increased slightly in 2020, the Economic Survey show, with a shift on the energy mix which has been leaning towards renewable resources.

However, effective electricity generation capacity dropped by 1.1 per cent to 2,705.3 MW.

“There was a notable increase of 32.1 per cent in hydro generation to 4,232.7 GWh mainly due to favourable rainfall experienced in 2020,” the Economic Survey 2021 notes.

Thermal electricity generation has been on downward trend in an effort to scale access to clean energy hence saving the country from heavy expenditure on petroleum imports.

In March this year, President Uhuru Kenyatta appointed a 15-member taskforce to undertake a comprehensive review and analysis of Power Purchase Agreements (PPAs) entered into by Kenya Power.

These involves Independent Power Producers (IPPs) whose foreign currency-denominated agreements have seen Kenya power pay 15 times more for a unit of electricity, than that of Kenya Electricity Generating Company (KenGen).

The government is keen to switch off the costly thermal generators in favour of renewable energy, mainly geothermal and wind.

Sales to large and medium commercial category declined by 3.6 per cent to 4,281.0 GWh in the review period.

This reflects reduced industrial activities mainly manufacturing in the wake of the Covid-19 pandemic that affected supply chains and demand for goods.

Transmission and distributive losses amounted to 2,790.7 GWh, accounting for 24.3 per cent of total domestic generation in 2020.

In the review period, 92.3 per cent of electricity was generated from renewable sources.

Electricity generation from geothermal, hydro and wind power sources accounted for 43.6, 36.5 and 11.5 per cent of electricity, respectively in 2020.

Generation of electricity from thermal sources, which is the only non- renewable source accounted for 6.5 per cent of total electricity generation in 2020.