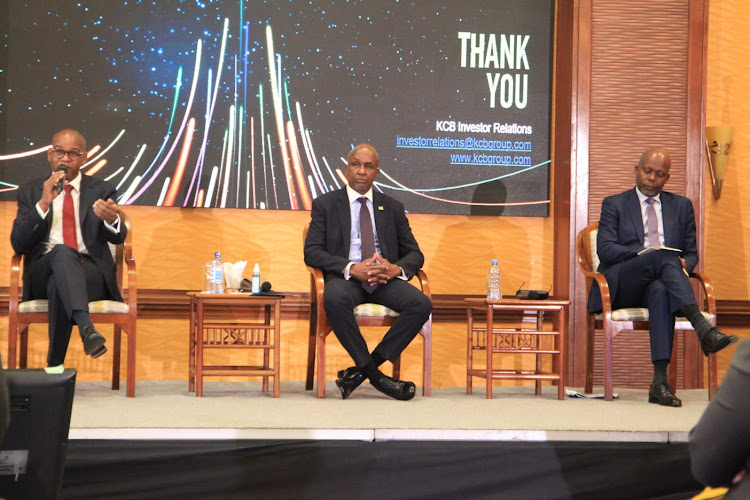 Kenya Commercial Bank's investment in National Bank of Kenya is paying back after the subsidiary posted a Sh717.6 million net profit in the first half of 2021.

This comes after a loss of Sh381.3 million in 2020 representing a 307 per cent growth driven by increased income from loan interest and foreign exchange trading, coupled with lower loan loss provisions.

KCB's Chief Financial Officer Lawrence Kimathi said that  the improved performance by NBK was pegged on the Group managing its cost base through a shared back office integration.

He further said that the Group's capital injection to NBK allowed them to recover from its bad loans allowing them to bounce back to profitability.

In the latest annual report, the Group noted that they injected Sh8billion into NBK to enable the subsidiary meet the capital adequacy requirements and also to bolster its resources.

Kimathi said that the capital also boosted NBK's credibility to customers as it saw them grow deposits which can then enable them to lend.

KCB Uganda was the only subsidiary that recorded a dip in profits in the period from Sh216million in the first half of 2020 to Sh181million.

During the half year, the lender's customer deposits stood at Sh99.7 billion due to increased inflows among existing clients and new accounts in corporate and retail business units of the Bank.

This saw total assets grow by 12 per cent to Sh 134 billion, driven by growth in net loans and advances, which were up 20 per cent to Sh60billion.

Net interest income on the other hand grew by 21 per cent from the previous year to stand at Sh4.1billion.

The half year was marked by a 30 per cent growth in interest paid to Sh1.7 billion on increased customer deposits, from transactions on the revamped digital channels.

Total operating costs during the period remained relatively flat at Sh4.1 billion over a similar period in 2020.

“This has been a strong first half that will ensure we help our customers reposition for the awaited economic recovery going into the second half of 2021,” said NBK Managing Director, Paul Russo.

Kimathi on the other hand said they expect NBK to continue delivering good results and they expect to see a return on investment starting next year on the capital they put in.

KCB Group as a whole, doubled its earnings through the first six months of 2021, posting a 101 per cent growth in net profit for the period to Sh15.3 billion.

The growth was largely attributable to higher operating income and a reduction in overall costs.

The lender's total operating income increased to Sh51.2 billion from Sh45 billion in June 2020 on the back of strengthened income streams and it trimmed its non-interest based overhead costs to Sh29.3 billion

The Group’s customer deposits increased to Sh786 billion from Sh758.2 billion in the first half of 2020.

“We saw a strong first half of the year for the business with improved economic activity. The resilient and diversified nature of our business has helped us navigate the unfolding impact of the COVID-19 pandemic,” said KCB Group CEO & MD Joshua Oigara.

The Group attained a historic milestone with the balance sheet closing the half at Sh1.02 trillion, up from Sh953 billion.

However, KCB's  board has not recommended the payment of an interim dividend for the period.

Kimathi said they did not pay dividend as the Group is set to acquire banks in Rwanda and Tanzania therefore they decided to save the dividend payouts.

In September 2019, the Central Bank of Kenya (CBK) approved the 100 percent share capital acquisition of NBK by the KCB Group where it operates as a stand-alone subsidiary.