Dividend dryspell at Equity to end this year 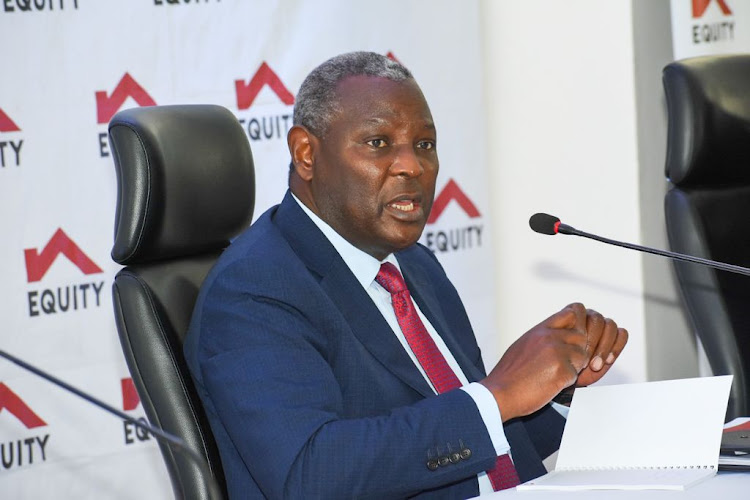 Shareholders of Equity bank should expect a dividend payout at the end of this financial year, the bank's CEO James Mwangi has said.

Speaking when the lender released its financial results for the first six months of 2021, Mwangi said that the lender will go back to paying out dividends starting this year in compliance with a policy of its board.

The payout will end a two-dividend dry spell that has seen the bank reinvest its shareholder earnings.

The shareholders will receive 30 percent to 50 percent of annual net profits as dividends for the financial year ending December 31, 2021.

The new policy is a departure from the current one that had not been fixed and mostly allows the group to distribute up to 40 percent.

The open policy had allowed Equity to freeze payments as has happened in the last two financial years, as the lender to preserve cash.

Having the new policy will mean that the bank’s shareholders will not miss out on dividends on any given year it posts a profit.

In 2020,the largest bank by assets, raised the payout to Sh9.43 billion but recalled it citing the need to preserve cash in the Covid-19 business environment.

The skipped payment for two years had seen retained earnings jump by Sh50 billion or 64 percent to Sh127.4 billion.

Meanwhile, the lender yesterday announced a 98 percent growth in half-year profits to Sh.17.9 billion up from Sh9.1 billion the previous year defying the ravaging economic effects of the pandemic.

Mwangi said the defensive and offensive strategy adopted by the Group at the onset of the Covid-19 pandemic to create resilience, agility and recovery was very effective in driving performance.

The defensive approach focused on high asset quality, strong capital and liquidity buffers that saw the Group present a strong non-performing loans (NPL) coverage of 92 per cent up from 73 per cent the previous year attributed to a decline in gross non-performing loans by Sh1.3 billion from Sh61.2 billion to Sh59.9 billion.

Loan loss provision declined by 66 per cent from Sh7.7 billion to Sh2.6 billion to register cost of risk of 1.2 per cent down from 4.2 per cent.

Net non- performing loans declined by Sh5.4 billion from Sh28.3 billion to Sh22.9 billion due to the aggressive provisioning the previous year under the defensive strategy.

Business transformation through innovation and digitization has continued to yield an agile and efficient business for the lender with 97 per cent of their customer transactions being online.

This saw digital banking transactions grow by 57.6 per cent to 606.9 billion up from 385.2 billion transactions same period the previous year.

The value of the digital transactions increased 111.3 per cent to Sh2.5 trillion up from Sh1.16 trillion for a corresponding period the previous year.