A rise in fake stamps has been reported in alcoholic, non-alcoholic drinks and cigarettes.

•Swiss company–SICPA has been contracted by KRA to offer the Excisable Goods Management System (EGMS) which includes traceable excise stamps.

•Illicit trade has been denying Kenya more than Sh103 billion in revenue annually according to the Anti-Counterfeit Authority. 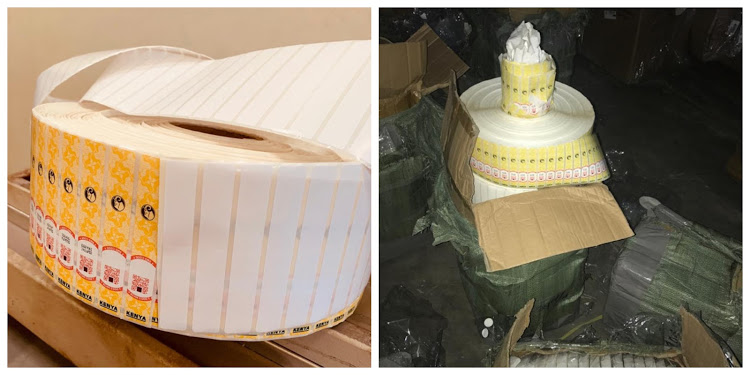 Fake stamps intercepted at the JKIA upon arrival from China, in 2019/
Image: COURTESY

The Kenyan retail market is flooded with fake excise stamps, a section of manufacturers have said, fueling growth of illicit trade mainly on excisable goods.

This even as Swiss company–SICPA mints billions from its Kenyan contract on the Excisable Goods Management System (“EGMS”).

It was however terminated upon execution of a second contract which commenced in February 2016, for a period of five years.

This means it expired in February and it is not clear if KRA has renewed the contract or plans to source another provider of the security feature, where Nairobi based-De La Rue is said to have expressed interest.

The EGMS also covers bottled water, juices, and non-alcoholic drinks where manufacturers of excisable goods have been paying SICPA Sh1.50 for every stamp attached to each item, earning the Swiss firm billions of shillings annually.

The taxman has been counting on the system to seal tax loopholes in excisable goods which helped increase taxes from alcoholic drinks and cigarettes when it was first implemented in 2013, from Sh700 million to above Sh5.6 billion, in short term.

A rise in fake stamps (imported) has been reported mainly in alcoholic beverages, non-alcoholic drinks including juices, water and cigarettes, with illicit trade denying the taxman billions in potential revenue.

She said the association has been working with KRA among other agencies to “curtail circulation of the same in the market, as part of the Multi-Agency Team against illicit Trade.”

“Trade in illicit goods, substandard and counterfeit products is a major challenge facing manufacturers, and the country at large,” Wakiaga said.

A recent study by the Anti-Counterfeit Authority(ACA), conducted between October 2019 and February 2020, indicates that illicit trade denied Kenya Sh103 billion in revenue in 2018. This was up from KSh101.23 billion in 2017.

The main driver of illicit trade is the need for quick money which unscrupulous traders ride on, by circumventing procedures needed for product development.

“This causes unfair competition in the market for the genuine manufacturers, in addition to shrinking their already existing market share,” Wakiaga said.

According to KAM, the other driver of illicit trade is lack of awareness by consumers and low purchasing power of consumers as they opt for cheap alternatives.

The rolling out of EGMS on bottled water, juices, soda and other non-alcoholic beverages raised operating costs and capital expenditures thereby significantly increasing the cost of doing business.

Consequently, this led to increased costs of these products.

“In a cash constrained environment, consumers will opt for cheaper alternatives, which, unknowingly to them, may be illicit products,” KAM notes.

KRA has remain mum over the fake stamps and the EMGS contract, noting there is a pending court case.

A bar operator has sued KRA for its failure to crack down on alcoholic spirits in 250-milliliter containers retailing at below Sh150, indicating tax cheat.

He further wants the Auditor General to audit and submit a report on the effectiveness of the EGMS system.

“The matter herein is before the Court and any discussion of the same might jeopardize the legal process. KRA will therefore wish to keep off the discussions revolving around the matter until the Court process is complete,” the taxman told the Star.

In a report after investigations into the KRA-SICPA contract, the National Assembly's Public Investments Committee, chaired by Mvita MP Abdullswamad Nassir recommended that upon expiry of the contract, KRA, Kebs and the ACA develop a “multifunction stamp” for use by the three government agencies.

“There is need for KRA to be conducting extensive public participation prior to implementing systems such as EGMS including consulting the consumers of excisable goods,” it recommended.