Kenyans mostly using faces with tears of joy, love heart, and rolling on the floor laughing.

•The popularity is also based on food and drinks, age, and gender.

•For the popular drinks and food, emojis are birthday cake, aubergine, shortcake, candy, and lollipop. 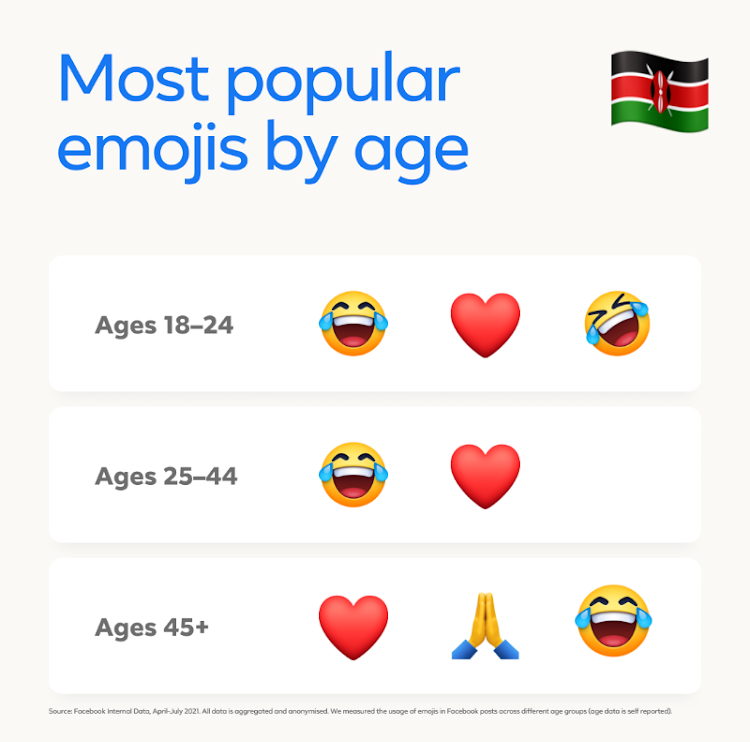 Most popular emojis by age in Kenya.
Image: FACEBOOK

We often use emojis in our text messages to express our emotions to the person on the other end, which offers a better way to add an emotional touch to a message.

Saturday marked the World emoji day, which is celebrated every July 17.

According to a survey done by Facebook, in Kenya, the top overall emojis used are faces with tears of joy, love heart, and rolling on the floor laughing.

The popularity is also based on food and drinks, age, and gender.

For the popular drinks and food, emojis are birthday cake, aubergine, shortcake, candy, and lollipop.

As by gender globally, women over the past three months created more posts containing emojis more than men. In Kenya, face with tears of joy, love heart, and rolling on the floor laughing emojis were popular for both men and women.

In addition, Facebook launched Soundmoji, which is a new feature that enables people to send short sound clips in messenger chat.

People will be able to choose from a library of options that range from sound effects to popular song clips. Each of the sound is sent as an emoji providing surprising delights through culturally relevant audio clips.

They are launching an entire Soundmoji library for you to choose from, which they will update regularly with new sound effects and famous sound bites.

Each sound is represented by an emoji, keeping the visual emojis we all love in play while bringing sound into the mix.

A recent study that was done by Bobble AI showed that 53 per cent of people think that emojis, stickers and GIFs help in expressing themselves better while chatting online.

The word emoji is a Japanese word that means pictogram or pictograph.

They were initially emoticons and then later in 1999, Shigetaka Kurita, who worked on the development team of an early mobile internet platform from Japan’s main mobile carrier, DOCOMO created the first set of emojis.

They became popular in Japan and around the world. They have now conquered the world of texting.

In 2007, a software internationalisation team at Google petitioned to get emoji recognised by the Unicode Consortium, a non-profit group that works to maintain text standards across computers.

Jeremy Burge, the founder of Emojipedia created the World Emoji Day in 2017 and announced that July 17 will be observed as World Emoji Day, which has since been celebrated annually.