Construction sector projected to grow by 3.9 per - architects

Presently, the Treasury has projected that Kenya’s Gross Domestic Product will grow by 7 per cent in 2021

•AAK said the ongoing construction of the Nairobi Expressway, the Lamu Port under LAPSSET and the dualling of the Nairobi-Mombasa Highway and the implementation of the affordable housing agenda has a critical role to play in the recovery of the sector 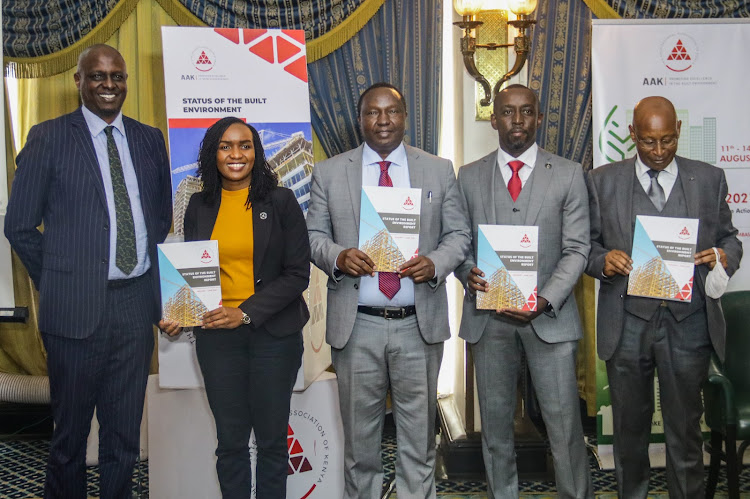 The Architectural Association of Kenya (AAK) projects a 3.9 per cent growth in the construction industry this year.

AAK in a report released Tuesday pegged the growth on a sharp recovery in output levels compared to periods when work was not permitted or was severely restricted in 2020.

“We project that the growth will particularly be propelled by huge infrastructural investments by the Government of Kenya,” AAK President Wilson Mugambi said.

He cited work on the Nairobi Expressway, the Lamu Port and the dualling of the Nairobi-Mombasa Highway and the implementation of the affordable housing project as key drivers in the sector's.

Mugambi spoke in Nairobi during the release of the status of the built environment report for the January to June 2021 period.

Mugambi said the growth of the real estate and construction sectors will be pegged on the overall performance of the economy.

He said the contraction in the country’s economy due to Covid-19 was equally felt in the built environment.

The National Treasury has projected that Kenya’s Gross Domestic Product will grow by 7 per cent in 2021.

“Kenya’s construction industry’s short term recovery will be supported by a quick return of private investment in the country’s residential and nonresidential construction sector,” he said.

The report shows that the residential sector in real estat continues to record improved performance, as demand in retail and commercial spaces decline.

According to the repot, the residential sector recorded an improvement in performance with average total returns to investors  at 5.1 per cent year-on-year, up from 4.7 per cent recorded in the financial year 2020.

Improved performance was also realised in the apartments market which recorded average total returns of 5.3 per cent year-on-year compared to the detached units which recorded an average return of 4.8 per cent.

“Detached units in areas such as Rosslyn, Ruiru and Kitisuru recorded the highest average year on year returns at 6.7 per cent, 6.3 per cent and 5.9 per cent, respectively,” says the report.

Apartments in Westlands, and, South C which traditionally houses Nairobi’s city’s middle-income earners, recorded the highest average year on year total returns of 6.8 per cent and 6.5 per cent respectively.

The report showed that Westlands and Karen were the best performing nodes in the First Quarter of 2021 recording average rental yields of 10.1 per cent compared to the overall market average of 7.4 per cent.

The performance is attributed to the presence of affluent residents who have a high consumer purchasing power with the areas hosting high-end income earners, the ease of access to the areas, and, relatively high occupancy rates of above 81 per cent against the market average of 74.9 per cent.

In the first quarter of 2021 nominal rentals for prime space of 500 m² on a national level grew by one per cent year on year.

The slow rental growth shows that the industrial market is also feeling the effect of the weak economy, although accompanied by less pain than the office and retail property markets.

Despite the ravaging effects of the Covid-19 pandemic, the overall land prices in the suburbs posted a modest 0.2 per cent increase over the first quarter of 2021 while the satellite towns saw a 1.5 per cent rise.

Riverside suburb which is characterised by a high density of office space recorded the biggest drops in land prices at 1.68 per cent over the first quarter of 2021 and is expected to decline by up to 7.1 per cent over the year.

Ngong led the satellite towns with prices of land increasing by 6.07 per cent over the first quarter of the year and 16.04 per cent annually.

In Kiambu, land prices recorded a 2 per cent drop over the quarter with the annual decline expected to be 12.6 per cent.

Nyari was the best performing suburb over the first quarter with land prices increasing by 2.2 per cent while annually Donholm topped at 3.7 per cent.