Cost of credit, internet and calls has gone higher with the implementation of the Finance Bill 2021 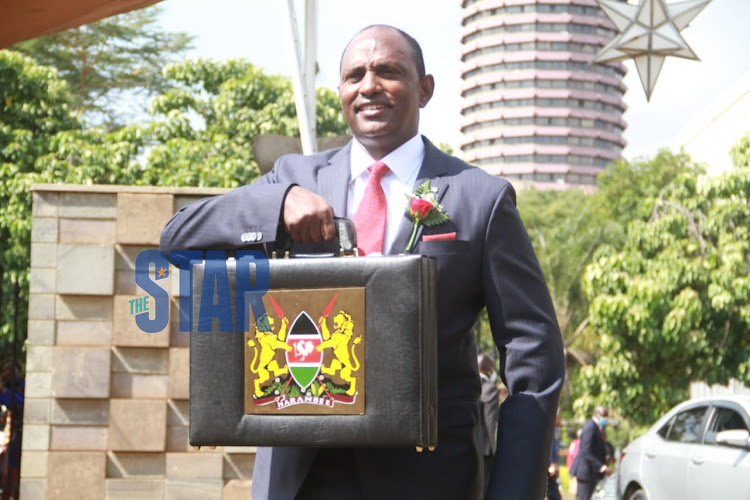 Eric Mugo, operates a food business in Westlands, his 'kibanda' (booth) serves many Kenyans in the busy area operating from 8am to 6pm.

For daily operational capital, considering some clients eat on credit, he depends on mobile loans from Safaricom's Fuliza to keep his business going running.

Daily he borrows at least Sh1,000 from the digital lender as he clears the previous loans. This has been his survival mode but with the new taxes in the Finance bill 2021 he says the cost of credit is too high.

In the bill which took effect from July 1, a 20 per cent tax on fees and commissions earned on bank credit is charged.

Following this new law, Safaricom wrote to its customers saying that starting July 6, 2021 Fuliza daily fees will include 20 per cent Excise Duty.

The new taxes mean that for every Sh1,000 Mugo borrows, he will have to pay Sh25 tax, this will also be factored in when repaying the loans which charges a one per cent interest daily.

“These taxes have become too many, what profits will I be making in my business if I have to pay back so much more,” said a frustrated Mugo.

Mugo added that the new taxes could force him to raise the cost of food, which could burden his clients who visit his outlet for affordable meals.

“I know times are hard from my clients. Naelewa (I understand), but I will have to factor in the cost of doing business so as to ensure I'm getting something small,” said Mugo.

Mugo's sentiments reflects that of other Kenyans who use digital loans to keep their businesses going or meet other needs.

“I borrow because I don't have money yet now the government wants to add interest on what I get, this life is becoming too hard,” said Stella Mutio, a university student.

On Safaricom's twitter handle, a customer by the name Annan asked the telco not to call him dear when delivering the increased cost on Fuliza, due to frustration. 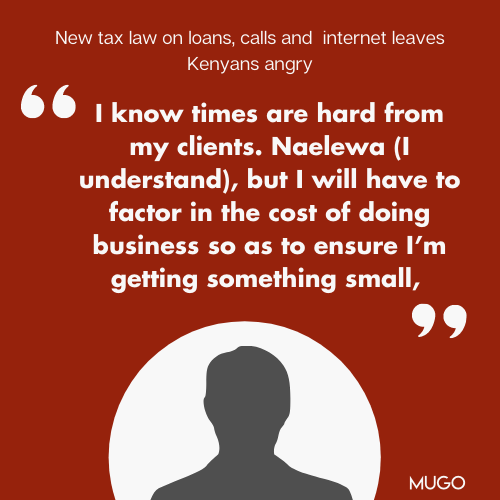 “20 per cent excise duty on Fuliza compounded with all the other excise duties, (airtime etc) will hit the ordinary 'wanjiku hard, why isn't the government understanding Kenyans,” tweeted economist, Morris Aron.

The excise duty is expected to be deducted before loan disbursement so this means if you borrow Sh1,000, you will get Sh985 and pay Sh1,075.

NCBA, Cooperative and KCB banks have also increased the cost of their loans after a 20 percent excise duty tax on fees and commissions earned on loans.

KCB bank said that loans advanced through the KCB M-Pesa will now attract a fee of 8.64 percent up from 7.35 percent.

NCBA and Cooperative banks notified customers said that new loans will include the new tax.

Apart from tax on loans, customers are also feeling the effect of an increase in excise duty on telephone and internet data services from 15 per cent to 20 per cent.

Airtel, Safaricom and Telkom have already increased the cost of the services.

Telkom and Airtel on net calls  will increase to Sh.2.78 cents per minute while Safaricom customers will pay Sh4.87 per minute.

“Even making calls will be a luxury now with these new costs, God help us,” said Vincent Mutua, a shopkeeper.

The new taxes come as the cost of living continues to rise on increased food costs, with the country's inflation rate hitting a 16-month high of 6.32 per cent in June.