•Other sources of income like poultry and livestock remain unsustainable due to low demand. 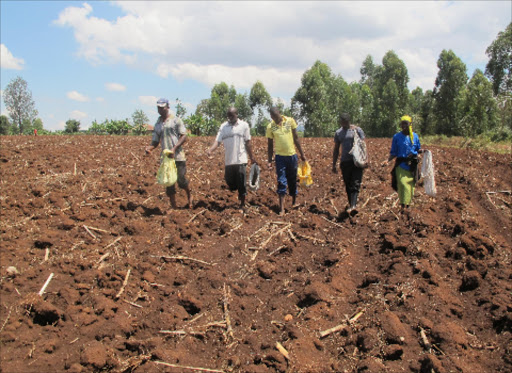 Farmers planting maize at a farm in Kapsara,Trans Nzoia county/

Kenya's agricultural industry suffers an average loss of $3 million (about Sh323.4 million) a day during lockdowns, according to a study.

On this, the horticultural sub-sector is the most vulnerable, the study by the Europe-Africa-Caribbean-Pacific Liaison Committee (COLEACP) shows.

The pandemic in general has led to a significant decline in household (farmers) income where at least 45 per cent of farmers have reported a drop in earnings, with unavailability of agricultural input materials and uncertainty about the markets for produces reducing production.

“Farmers who produce perishable goods like horticulture and floriculture outputs could not sell their products and incurred losses during the pandemic and lockdowns,” the report reads in part.

According to COLEACP , other sources of income like poultry and livestock remain unsustainable due to low demand, especially with reduced activities by restaurants, clubs and hotels in urban centres.

“The cost of transportation also remains high along with the high cost to procure raw materials,” COLEACP notes in its report.

A separate report by research firm–60 Decibels reports that 71 per cent of farmers paid a higher price for inputs between June and October, 2020 when the effects of the pandemic were rife.

The cost of leasing land also increased by 27 per cent.

“To cope with these rises, farmers have been cutting down on the cultivated areas, which will ultimately, make them more vulnerable,” the firm says.

Commodity prices have also been low with tea being among the most affected.

“All value chains were badly affected. Horticulture is where we saw many companies closing shop. However every other sector was affected as  no products were moving as the pandemic hit the north where our goods are sold,” said Chris Alouch, Fairtrade Africa Network, programmes director.

Agriculture tops the sectoral contribution to Kenya's economy, accounting for an estimated Sh150 billion in annual exports, while employing more than 70 percent of the workforce.