This will be the fourth time Kenya is going to the international market to raise money to support its budget in less than 10 years.

Kenya is on an international virtual roadshow to sell a $1 billion (Sh107 billion) loan by end of this month, the Star has learnt.

A source at the National Treasury said the news about Kenya floating a sovereign bond has been received well mostly by European and American lenders, pointing to a possible oversubscription.

''Most marketing is virtual. Officials are negotiating for better rates. The loan must be in by June 30,'' said the source who sought anonymity due to sensitivity of the matter.

Early this year, the director-general of the nation’s Public Debt Management Office at the National Treasury Haron Sirima revealed that the country was planning to float two external bonds in 2021.

According to him, the plan is to raise $1 billion by the end of June and an additional €1 billion in the fiscal year starting July 1.

Speaking at the 2021 NCBA Economic Outlook held virtually, Atiti said although the country's debt as a measure of GDP is likely to cross the 70 per cent mark, the portfolio will be greater as the Treasury retires high-interest commercial loans and going for long tenure ones. 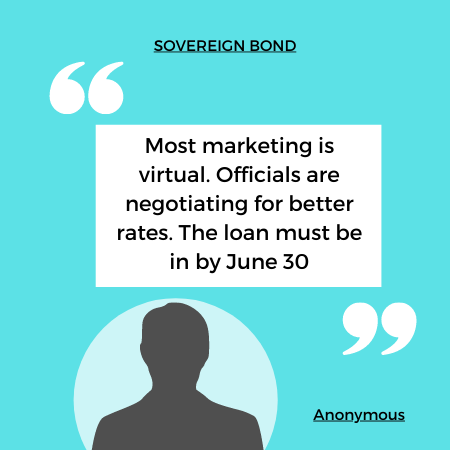 The new loans are expected to add on to public debt currently at Sh7.4 trillion, equivalent to 65.6 per cent of the gross domestic product in nominal terms.

The National Treasury wants to lift the statutory debt ceiling above Sh9 trillion to accommodate anticipated funding gaps in the  2021-22 budget.

The country is expected to clear several loans falling due by end of this month as the moratorium extended to it by G20 countries and Paris Club of investors in March ends.

The hunt for new commercial loans is coming on the backdrop of a backdrop of weaker credit rating by global rating agencies pointing out that Kenyan taxpayers will have to dig deep into their pockets to service the planned loan.

The three global rating agencies —Moody's S&P, Fitch, and  — have downgraded the country’s credit status largely due to its faster than expected accumulation of debt against falling revenue collection and staggering economy raising fears of the possibility of debt distress.

This will be the fourth time Kenya is going to the international market to raise money to support its budget in less than 10 years.

In May 2019, Kenya raised $2.1 billion from international capital markets to pay off other loans including a $750 million Eurobond that matured on June 24, 2019, and other debt obligations.

The bond was issued in two tranches of seven-year tenor and 12-year tenor priced at seven per cent and eight per cent respectively.

In 2014, Kenya issued a $2 billion Eurobond and tapped for a further $750 million, while the second Eurobond of $2 billion was issued in February 2018.