The president's agenda has been allocated Sh135.3 billion in the coming financial year 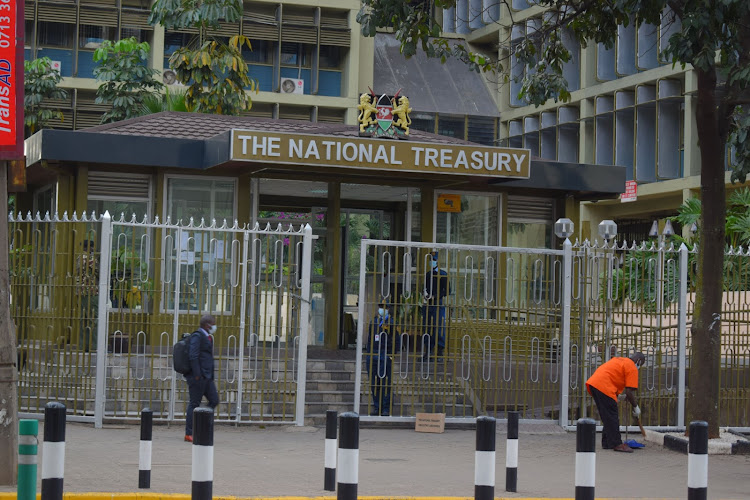 All eyes set on Treasury as the budget for the next financial year is set to be read on Thursday, June 8, 2021
Image: CHARLENE MALWA

As Treasury CS Ukur Yattani presents the 2021-22 budget today, MPs have noted the Big Four agenda might not be actualised before President Uhuru Kenyatta's tenure ends next year.

A report tabled in Parliament by the Budget and Appropriations Committee observes that the full benefits of President's Big Four agenda will not be achieved by 2022.

The committee chaired by Kieni MP Kanini Kega raised the concerns, noting that the 2021-2022 financial year will be the last one for the implementation of the agenda.

The National Treasury therefore has been tasked to develop a strategy beyond 2022 that will see the implementation of the Big Four flagship projects.

The committee recommended that the fourth medium term plan of the Vision 2030 should include the completion of the projects.

The agenda is focused on affordable housing, manufacturing, universal healthcare and food security, where most projects now hang in the balance.

The committee noted that the universal healthcare scheme meant to cover one million poor houses at Sh6 billion annually, has never taken off.

This is despite the National Assembly providing the budgetary allocation in the current financial year.

The committee however said this could be due to an overlap of functions between the UHC scheme and the Linda Mama and EduAfya programmes.

“In the 2021-22 financial year, streamlining of functions will be crucial to eliminate duplication and reduce resource wastage to be able to complete projects on time,” the committee said in its report.

Under the housing agenda, a target to provide 500,000 affordable and decent housing for all Kenyans by 2022 has fallen short of expectations.

So far, only 1,370 housing units along the city's Park road project have been achieved under this programme. This represents an achievement rate of 0.3 per cent.

In the Budget Finance Bill presented to Parliament for consideration, a Sh3.63 trillion budget was proposed.

Yatani has proposed to invest Sh135.3 billion on the Big Four agenda.

The Parliamentary Budget Office has also raised concern on whether the current administration will be able to meet the Big Four targets, querying if the allocations are enough to agenda the necessary push.

“Other than an indication that it has been allocated Sh135 billion in the next financial year, there is no further discussion on how the government will ensure that at least a certain percentage of the targets are met,” the PBO said.

PBO has also warned that it is unlikely that the Sh135 billion allocated for the big four will serve its purpose, warning that the set targets might not be met.

“It is worth noting that budgetary allocations towards Big Four projects tend to be adjusted downwards during the supplementary budget,” PBO said.

But even as the Big Four agenda faces uncertainty, the PBO document stresses its importance given the role it is expected to play in economic growth.

“A review of the project's status and plan of action is necessary to ensure that at least some of the targets are achieved by 2022.”

Uhuru, in November last year, had noted that his administration may not fully deliver on its ambitious Big Four agenda by the time his term ends in 2022.