Taxman says keen to ensure no taxes are lost

•Rogue players have continued to manufacture and channel products into the market using fake excise stamps.

•Illicit imports and non or mis-declaration of taxes by individuals and companies also denies the taxman revenues.

The KRA headquarters at the Times Towers.
Image: FILE

Kenya Revenue Authority has put tax evaders on notice as it moves to seal revenue leaks, amid a depressed economy in the wake of the Covid-19 pandemic.

“KRA has intensified its fight against tax evasion to ensure that no revenue is lost,” Commissioner General Githii Mburu  said.

This, even as financial experts warn against long-drawn lock-downs which could derail measures revive the economy.

The taxman who last Saturday announced a Sh144.6 billion collection in the month of March, up from Sh127.7 billion in February, has heightened its war on tax evasion with excise tax being among the most evaded.

Fake excise stamps, illicit imports of goods and non or mis-declaration of taxes by individuals and companies is used to evade taxation.

According to the  Anti-Counterfeit Authority, networks of cross-border smugglers target fast moving and highly profitable goods including food stuff, electronics and cosmetics.

Consignments of illegal alcoholic beverages have in recent times been among confiscated goods in the tax evasion racket.

A number of companies have also continued to mis-declare or under-declare taxes.

The taxman is also all eyes on individual taxpayers as filing of 2020 annual tax returns continues, a process that kicked off on January 1.

“All annual tax returns for both individuals and entities from January to December 2020, should be submitted online on the iTax platform on or before 30 June 2021,” Mburu has said.

KRA is also implementing a number of revenue enhancement measures, he said, which include revamping the audit function, tax base expansion and enhanced debt programme. 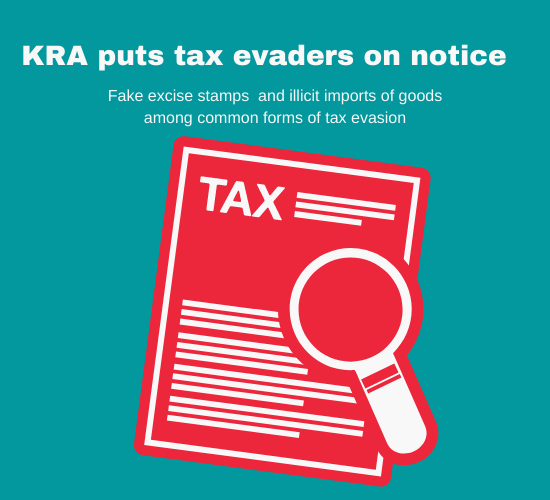 It is also implementing post clearance audits, comprehensive audit of all exemptions, and enhanced scanning and intelligence led verification of cargo at the ports of entry.

The  tax evasion coupled with the nation-wide curfew and the on and off cessation of movement measures have hurt KRA's revenue targets.

“It is better for the restaurants to completely shut operations and remain with fixed expenditure such as rent. They cannot sustain normal operations,” said Boniface Gachoka, Secretary-General, Hotel and Liquor Traders Association of Kenya (BAHLITA).

Financial risk expert, Mihr Thakar, yesterday said: “A long drawn-out lockdown has the potential of incinerating gains made through the government's cushioning measures taken in 2020.”

Retail and recreation mobility data shows a significant rally from pre-Covid baseline in the first quarter of 2021, after staging a brutal 50 per cent crash in April 2020.

The Stanbic PMI has witnessed growth for eight straight months into February 2021, clocking nearly 60 in October 2020..

Despite the slow economic progression, KRA registered 11.2 per cent revenue growth collecting a surplus of Sh6.6 billion, the fourth month running it has posted an improved and above target performance since December 2020.

“The good revenue performance has been enhanced by the sustained implementation of compliance efforts, revenue enhancement initiatives and improved service delivery to taxpayers,” Mburu said.

Customs and border control department had a growth of 18.3 per cent with a revenue collection of Sh60.7 billion, up from Sh51.3 billion.

Domestic Taxes registered a performance rate of 91.4 per cent after collecting Sh83.378 billion.

The performance was largely affected by corporation tax which registered a decline of 35.2 per cent, driven by significant decline of 62.8 per cent in the ICT sector.

Paye As You Earn registered improved performance of 110.7 per cent, KRA announced, with collection of Sh34.5 billion, accumulating a surplus of Sh 3.339 billion.

The performance was boosted by revenue collection in the public sector which had a growth of 5.7 per cent, even as the private sector continued to contemplate lay-offs as a result of low revenues in the wake of the pandemic.