•Over 400 high-end facilities in Mombasa, Diani, Kilifi, Malindi, and Lamu have reported  low numbers this year.

•Occupancy is averaging between 10-20 per cent. 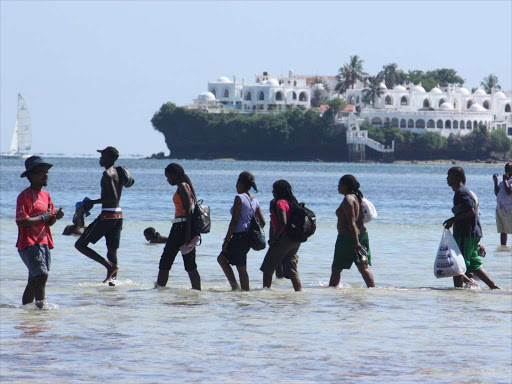 Domestic tourists at the Jomo Kenyatta Beach (Pirates) in Mombasa during a past Easter Holiday/
Image: FILE

The cessation of movement out of five key counties has dealt a major blow to the hotel industry, with facilities at the Coast which is Kenyans favourite destination almost empty this Easter.

Last Friday, President Uhuru Kenyatta restricted movement by road, rail, or air into and out of Nairobi, Kajiado, Machakos, Kiambu, and Nakuru counties, marked as one zone-disease infected area.

Nairobi is a leading domestic market for Mombasa and other key destinations among them Nanyuki, Malindi, and Lamu and the lockdown has sent the industry into a gloomy Easter vacation for the second year running.

This is after failing to cash-in on last year‘s Easter festivities a time when international flights had been suspended while moving into the coastal counties was restricted to contain the spread of Covid-19.

Traditionally, the Easter holidays, which mostly coincides with the closure of schools during the April holidays, has been a high-season with hotels reporting between 90-100 per cent occupancy.

Over 400 high-end facilities in Mombasa, Diani, Kilifi, Malindi, and Lamu are however reporting low numbers this year.

Airlines, the Standard Gauge Railway, and road transport to the coast, from Nairobi is grounded.

“We don’t have flights. We suspended as per the government directive that has stopped movement from Nairobi,” Wilson Airport based regional carrier- Safarilink Aviation Limited told the Star on the telephone yesterday.

Most hotels at the Coast are averaging between 10-20 per cent over Easter, according to Sylvester Mbandi, general manager at Baobab Beach Resort-Diani, a member of the Kenya Association of Hotel Keepers and Caterers(KAHC).

Tsavo East, West and Amboseli, which have up to 20 major hotel facilities and camps have also reported low numbers, with an average below 20 per cent.

Recent chartered flights from Romania and Poland have however breathed life into some facilities at the Coast and Tsavo, with direct flights to the region expected to bring in more numbers.

“We are hopeful but for the domestic market, mainly Nairobi, we are going to miss out big,” said Willy Mwadilo, General Manager Taita Hills Game Lodge and Salt Lick.

With Mombasa and Nanyuki being inaccessible, a good number of Nairobi residents are expected to drive down to Naivasha, but spending is expected to remain low on constrained disposable income occasioned by the Covid-19 pandemic.

“We had planned to go down to Mombasa for the Easter weekend as a group but now with the closure, we have had to defer our hotel booking to another day,”  Susan Nyawira, a Nairobi based Journalist said.

Hoteliers were banking on last-minute bookings from domestic travelers to drive up numbers over this Easter weekend, as the domestic market remains a lifeline for the sector which has been hard-hit by the pandemic.

According to KAHC chief executive Mike Macharia, hotels and tourism outfits in Mombasa, Diani, Kisumu and Nanyuki regions were expecting a boom this weekend, something that has been turned around by the cessation of movement.

“It is not business as usual. The industry is really struggling,” Macharia told the Star.

The dry spell has put a threat on jobs, with the Kenya Tourism Federation (KTF) warning of job losses.

More than 30,000 employees in the hotel industry countrywide were sent home last year at the height of the pandemic, which saw hundreds of hotels closed.

“With the new measures, it means a lot of our staff will be sent back home again which is unfortunate,” said Mohammed Hersi, KTF chairman and Pollman's Group Operations Director.

The domestic market contributed to 4.9 million bed nights in 2019, up from 4.4 million the previous year.

No Easter for hotels as tourists cancel travel

Over 400 high-end facilities at the Coast remain closed.
Business
1 year ago